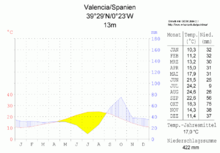 Climate diagram from Valencia to Walter / Lieth.
In the heading the place, its geographical coordinates and the height above sea level . Left the diagram. On the right is a table with the monthly mean values ​​for T and N , including the annual values ​​for T and N.

A climate diagram is a graphic representation of the climatic conditions at a certain location over the course of the year. From this, the long-term mean values ​​of the temperature and precipitation conditions measured in climate stations over decades can be taken.

Creation of the measured values

The most frequently used hygrothermal (Greek hygros = water, humidity and Greek thermos = warm, warmth) climate diagrams take into account measured values ​​for precipitation (N) and temperature (T). These are shown as 30-year mean values ​​in accordance with the normal climate periods (definition of climate = period of 30 years). For the temperature, the daily mean temperatures are averaged for each month; the precipitation of a month is accumulated. These average values ​​are recorded in the climate diagram.

The benefits of a climate chart

The climate diagram offers the possibility of making a quick, rough assessment of the regularly recurring local weather conditions with a brief observation . In hygrothermal diagrams, any aridity and / or humidity can be determined, which in turn allows conclusions to be drawn about dry seasons and vegetation conditions that determine the land use possible for humans . When planning a long-haul trip, a look at the climate diagrams of the travel destinations in question can be helpful.

A distinction can be made between different types of climate diagrams: Walter / Lieth climate diagram, thermoisopleth diagram, climograms and diagrams that deviate slightly from the conventions of these types.

Climate diagram from Rome according to Walter and Lieth, but the precipitation values ​​as a bar chart.

In the frequently used type according to Heinrich Walter and Helmut Lieth , the average monthly temperatures (T) are traditionally compared with the long-term mean value of the total monthly precipitation (N) over the course of the year (= hygrothermal). It is assumed that the evaporation depends on the air temperature , namely that at a monthly mean temperature of 10 ° C about 20 mm of precipitation evaporates, at 20 ° C about 40 mm, etc. This portion of the precipitation cannot seep away and is therefore available not available to the plant roots . Only when the precipitation value is higher than twice the temperature value does the area receive plant-available water for the natural vegetation and the agricultural areas.

The scales for the units of T and N are in the ratio 1: 2 (i.e. 10 ° C is at the same height on the y-axis as 20 mm N). From 100 mm of precipitation, N is usually represented in such a way that the scale in this upper area is flattened to a fifth of the height (one step on the y-axis then corresponds to 100 mm N instead of 20 mm N before). This flattening can be seen in climate diagrams of places that are (at times) very humid, e.g. in constantly humid, tropical climates or seasonally humid monsoon climates with extremely high seasonal rainfall (see below). Due to the 1: 2 ratio in the temperature ranges up to +50 ° C (corresponds to N 100 mm), when looking at the diagram, statements about humidity or aridity can be made immediately, since humid months are defined in such a way that their potential evaporation through the precipitation is exceeded (i.e. that there is generally water left for plants). Aridity is sometimes made clear by highlighting the temperature curve when it exceeds the temperature curve, i.e. the integral between T and N (if there is no precipitation, the integral below the T curve; see figure below in yellow).

Interpretation and assignment of climate diagrams

If the temperature curve has a very high amplitude over the course of the seasons, the climate is continental . If the amplitude is low, a heat-balancing sea influence is effective ( sea ​​climate ). If the temperature curve runs almost in a horizontal line, the climate station is in the tropics with a daytime climate . If the climate diagram shows both arid months and humid months with relatively high precipitation, the latter are either rainy seasons in the humid tropics or summer monsoon rains . In summer drought and winter rain, the climate station is located in a location with a Mediterranean climate or the subtropical winter rain climate on the west side . Using the temperature curves and precipitation values, each climate diagram can be assigned to a climate zone . It should be noted that due to the constant inclination of the earth's axis during summer, the northern hemisphere is winter on the southern hemisphere and vice versa ( seasons ).

The form of representation of the precipitation by means of columns has the advantages that, on the one hand, it illustrates the type of measurement of N using a water column and, on the other hand, it makes it clear that precipitation occurs in sudden events that are distributed differently than T. The disadvantage of displaying total monthly precipitation is the construction of the Gregorian calendar , in which months have different numbers of days. The comparability of the columns has to be put into perspective: the viewer of the diagram has to consider, for example, that with even rain, months with more days will have a correspondingly higher total amount of precipitation.

The thermoisopleth diagram (gr. Thermos = heat; isopleths = lines of equal values) is based only on the averaged temperature values ​​of a location. Precipitation is not shown here, but in addition to the course of the year, the course of the day temperature is also shown. This makes it possible to classify them according to the seasonal or time of day climate.

Note: In addition to thermoisopleths, there is another type of lines of the same temperature: the isotherms . However, only the lines in pV diagrams or weather maps are called isotherms , hence the different designation thermoisopleth .

Other forms of representation of climatic conditions include, for example, the climogram , which graphically depicts the relationship between temperature and precipitation values ​​over the course of the year using a function curve.

Some climate diagrams take into account the average amplitude in the daytime cycle, also called day-night amplitude, for the air temperature, and represent this with vertical bars for each month (see box plot ). The upper end of the bar corresponds to the mean daily maximum temperature (typically afternoon values, since solar radiation generally causes the air temperature near the ground to rise with a certain delay). The lower end of the bar corresponds to the mean daytime low temperature (typically early morning values ​​just before sunrise, as the air cools down throughout the night). For better readability, these temperature values ​​are often given in the diagram.

A climate table is an alternative graphical representation of the climate at a specific location. Example: Hamburg .