The title of this article is ambiguous. Further meanings are listed under polar front (disambiguation) . 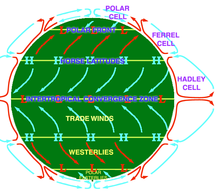 In meteorology, a polar front is understood to be the boundary area between the oppositely flowing air masses of polar cold air and subtropical warm air .

In contrast to the weather-effective fronts of the low pressure areas , the polar front separates two main air masses of the atmospheric body at approximately 60 ° latitude, which is why it is also referred to as the climatic front . It is not designed as a uniform belt, but shifts with the large-scale different advance of polar and warm air masses to the south and north in so-called Rossby waves . As a turbulence zone, the polar front is the area of ​​origin of the dynamic low-pressure areas that strongly determine the weather in the higher central latitudes .

Rossby waves in the northern hemisphere, the jet stream and the polar front. Displacement of warm and cold air masses up to and including drops of cold air .

The waves of the polar front jet stream, which largely determines the weather in the northern hemisphere , have shifted less strongly in the recent past than in the past. This creates heat waves , especially in Europe, Japan and the western United States.