He is Professor at the Scripps Institution of Oceanography at the University of California, San Diego and directs the Center for Clouds, Chemistry & Climate (C4). He assumed a central role in the research history of climate change , as he had already warned in the mid-1970s about the consequences of previously neglected greenhouse gases for the earth's atmosphere . His research on global warming and atmospheric brown clouds provides fundamental insights into the earth's climate.

In the mid-1970s, Ramanathan belonged to the small group of scientists who warned of neglected greenhouse gases in very low concentrations. In 1981 he described that the very strong greenhouse effect of chlorofluorocarbons (CFCs) alone would warm the earth's atmosphere by a whole degree by the year 2000 if emissions of this gas were not dramatically reduced. In a sensational work from 1985 he stated that no fewer than 30 trace gases act as greenhouse gases and that humans have already significantly increased the concentration of these gases and continue to do so. Taken together, the gases would have almost the same global warming potential as carbon dioxide , which was previously the focus of the considerations.

Ramanathan's knowledge was underpinned in the year of its publication by the discovery of the ozone hole over Antarctica . So atmospheric chemists were right in their warnings about the threat to the ozone layer. And politicians from outside the field could now also see how great the influence of trace gases in the smallest concentration can be on the atmosphere. If global warming from carbon dioxide alone was a threat, it was now clear that the core problem was much larger. International action was required. Two years later, in 1987, the Montreal Protocol decided to ban the manufacture of CFCs, and in 1988 the Intergovernmental Panel on Climate Change , or IPCC for short, was established. 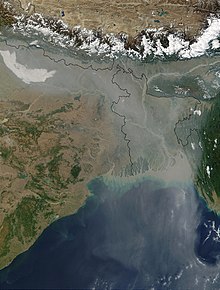 Ramanathan has contributed to the exploration of the earth's atmosphere in several areas and also dealt with the planetary circulation . In recent years he has increasingly devoted himself to earth system science , especially with regard to anthropogenic warming and the associated feedback and danger thresholds of various tipping elements .

In 2017, together with his colleague Yangyang Xu from Texas A&M University, he redefined the categories of climate change, adding two more (over three degrees warming):

The article appeared in the journal Proceedings of the National Academy of Sciences . Xu and Ramanathan calculate with a 50 percent probability that global warming will exceed the dangerous threshold within three decades, unless greenhouse gas emissions are significantly reduced. They defined reaching the catastrophic level with a five percent probability. This value may seem low, explained Ramanathan in an interview with the San Diego Union-Tribune : "But would you get on a plane if there was a five percent chance of it crashing?"

As Unknown a threat scenario described by scientists in which climate change is an existential threat to almost all Earthlings. At times it would be so hot that billions of people could only survive with the help of air conditioning and massive resettlements would be necessary.

At the end of 2018, together with Yangyang Xu and David G. Victor , he published a study in the journal Nature that came to the conclusion that the earth's climate system is overheating faster than previously feared. According to this study, the combination of three factors - increasing emissions, reduced air pollution and natural climate cycles - could cause a warming of 1.5 C to occur as early as 2030, not 2040.

In addition to his functions at the Scripps Institution of Ozeanograph and at the Center for Clouds, Chemistry & Climate (C4), he heads the research project Atmospheric Brown Cloud (ABC) and the Project Surya , which distributes inexpensive solar cooking appliances in India and Kenya, thus contributing to reducing emissions want to achieve and scientifically monitor the effects. He also holds a UNESCO professorship at The Energy and Resources Institute (TERI) in New Delhi .