Madurai ( Tamil : மதுரை Maturai [ ˈmad̪ɯrɛi ]; until 1949 Madura ) is a city in the southern Indian state of Tamil Nadu . The city, one of the oldest in South Asia, is located in southwest Tamil Nadu on the banks of the Vaigai River and today has a population of around 1 million. This makes Madurai the third largest city in the state. The city is the administrative seat of the Madurai district .

Madurai is one of the oldest cities in South India and can look back on over two thousand years of history. Between the 3rd century BC In the 4th century AD and the 4th century AD, Madurai was the capital of the Pandya Empire, one of the first early empires of South India. In the 12th century, the Pandya Empire experienced a renaissance. Later Madurai was the capital of the short-lived Sultanate of Madurai and then the nayaks of Madurai. The main attraction of Madurai is the Minakshi Temple , whose towering gopurams (gate towers) dominate the cityscape of Madurai, visible from afar. The temple, built mainly during the Nayak period in the 15th to 17th centuries, is an outstanding example of Dravidian temple architecture . 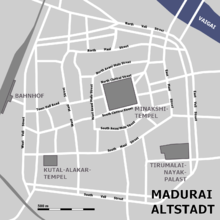 Plan of the old town of Madurai

Madurai is located in the south of Tamil Nadu around 450 kilometers southwest of Chennai (Madras), the capital of the state, and 250 kilometers north of Cape Comorin , the southern tip of the Indian subcontinent. The city is the administrative seat of the Madurai district . Madurai lies on a plain at about 140 meters above sea level, surrounded by individual rugged mountains, the Elefantenkopfberg in its northwest is particularly striking. The Vaigai River flows through the city, but it only carries water during the rainy season.

The Madurai Borough ( Madurai Corporation ) covers an area of ​​148 square kilometers. Madurai is divided into the old town on the southern bank and the new town on the northern bank of the Vaigai River, which was created during the colonial era. The Minakshi Temple , Madurai's most important attraction, literally forms the center of the old town: The city plan of the old town is oriented with several concentric ring roads that follow the outline of the temple complex, and streets running axially towards the gopurams (gate towers) of the temple after the Minakshi Temple. The roughly rectangular ring streets Chittrai Street, Avani Mula Street and Masi Street are named after months of the Tamil calendar . In the respective month, the images of the gods are drawn from the temple in a large procession through the corresponding street. The outermost ring road, Veli Street , was built on the site of the city fortifications destroyed in the early 19th century. With its city plan built concentrically around the Minakshi Temple, Madurai embodies the type of the classic South Indian temple city, although not with the same regularity as the ideal example of Srirangam .

With a history spanning over two thousand years, Madurai is one of the oldest cities in southern India and is considered the cradle of Tamil culture. Hence it is nicknamed " Athens of the East". The origins of the city are in the dark. The local legend derives the name Madurai from the Sanskrit word madhura ("nectar"), but it is more likely that there is a connection to the city of Mathura in northern India. In the first centuries before Christianity, the Pandya dynasty ruled from Madurai one of the first early empires of southern India. The Greek historian Megasthenes , who in the 3rd century BC At the court of the north Indian Maurya ruler Chandragupta , reports in his Indike of the Pandya empire and its capital Madurai. Madurai is also mentioned in the Sanskrit text Arthashastra of Kautilya (around 300 BC?). Madurai played a prominent role in the ancient Tamil sangam literature (1st to 6th centuries AD). Legend has it that the city was the seat of an academy ( sangam ) of poets who practiced Tamil poetry. Among the numerous mentions of Madurai in Sangam literature, the Maduraikkanchi stands out, vividly describing city life in Madurai in 782 verses. The epic Silappadigaram is also set in Madurai.

The invasion of the Kalabhra in the 4th century AD ended the supremacy of the Pandya, who from now on were only vassals of other rulers. At the end of the 12th century, however, the Pandyas managed to regain their supremacy. In 1279, the Pandya defeated the previously ruling Chola empire and were able to expand their empire to Godavari and the north of Sri Lanka .

The rule of the Pandya was broken again soon afterwards when Malik Kafur , a general of Ala ud-Din Khaljis , led a campaign of the Sultanate from Delhi to southern India in 1310 and conquered Madurai. In 1334 the independent Sultanate of Madurai emerged from the province of the Delhi Sultanate . Islamic rule over the area only lasted for a short time: in 1372 the sultanate was defeated by the Hindu kingdom of Vijayanagar , which subsequently developed into the most powerful empire in southern India.

Robert Montgomery Martin: The Celebrated Hindoo Temples and Palace at Madura (around 1860)

The Vijayanagar rulers set up military governors ( nayaks ) in different parts of their empire , who went into business for themselves after the fall of the Vijayanagar empire in 1565. The nayaks of Madurai ruled from Madurai and later from Tiruchirappalli (Trichinopoly) over the southern parts of what is now Tamil Nadu. The expansion of the Minakshi Temple and the construction of the Tirumalai Nayak Palace go back to the Nayak period. After the death of the greatest Nayak ruler Tirumalai Nayak (1623-1659), the rule of the Nayaks of Madurai visibly destabilized before it finally went under in 1736. During the 18th century Madurai was ruled by the Nawabs of Arcot and the Marathas before it came under British influence.

In 1801 the Arcot Nawab ceded its possessions to the British. So Madurai became part of British India and was incorporated into its Madras Province . The British made Madurai the district capital and built the new town ( Cantonment ) on the other side of the Vaigai River . After Indian independence, Madurai came to the newly formed state of Madras of the Indian Union in 1956, which was renamed Tamil Nadu in 1969. 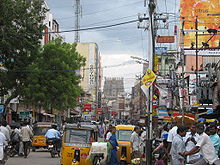 Street scene in Madurai, in the background the Minakshi Temple

According to the 2011 census, Madurai has 1,016,885 inhabitants. This makes Madurai the third largest city in Tamil Nadu after the capital Chennai and the industrial city of Coimbatore . The agglomeration of Madurai, which extends beyond the administrative city limits, has 1,462,420 people.

According to the 2011 census, Hindus make up the majority of Madurai's inhabitants with 86 percent. There are also minorities of Muslims (9 percent) and Christians (5 percent). Madurai is the seat of the Roman Catholic Archdiocese of Madurai and the Diocese of Madurai-Ramnad of the Anglican Church of South India .

The main language in Madurai, as in all of Tamil Nadu, is Tamil . According to the 2001 census, 91 percent of Madurai's residents speak Tamil as their first language. The largest linguistic minority are the speakers of the Saurashtri (5 percent of the city's population). The Saurashtri is closely related to the northwest Indian language Gujarati , its speakers are members of the weaving caste of the Patnulkarar , who originally immigrated from Gujarat and now settle in various cities of Tamil Nadu. In addition, in Madurai, as in other places in Tamil Nadu, Telugu speaking castes have lived since the Vijayanagar period . Telugu speakers make up about 2 percent of the city's population. Other languages ​​account for a further 2 percent. 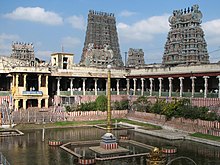 Inside the Minakshi Temple

Madurai's main attraction is the Hindu Minakshi Temple . It is dedicated to Minakshi , a local manifestation of the goddess Parvati , and her husband Sundareshvara ( Shiva ), who according to myth are supposed to have married in Madurai. The oldest parts of the Minakshi Temple date from the Pandya period in the 12th – 13th centuries. The temple received its present form mainly during the Nayak rule in the 16th and 17th centuries. Century. The Minakshi Temple is considered to be the flower of the late Dravida style . The temple complex, spanning over six hectares, includes the main shrines and numerous other structural elements, including several large pillared halls and a temple pond. The twelve towering gopurams (gate towers) of the temple are decorated with lavish and colorfully painted figurines and dominate the cityscape of Madurai.

Another attraction in Madurai is the Tirumalai Nayak Palace in the eastern part of the old town. It was built in 1636 under the rule of the Nayak ruler Tirumalai. Originally the palace complex was much larger, today the main hall, the dance hall and the 75 × 52 meter inner courtyard have been preserved. Nevertheless, it is one of the most important examples of palace architecture in South India.

Madurai is one of the tourist attractions of Tamil Nadu thanks to the Minakshi Temple. In 2011, 8.5 million domestic and foreign visitors came to the city.