Tiruchirappalli ( Tamil : திருச்சிராப்பள்ளி Tiruccirāppaḷḷi [ ˈt̪iɾɯtːʃiɾaːpːaɭːi ]; there are several different spellings in the Latin script), earlier English. Trichinopoly , also known as Tiruchi or Trichy for short , is a city in the southern Indian state of Tamil Nadu . Located on the banks of the Kaveri River, Tiruchirappalli is the fourth largest city in Tamil Nadu with around 850,000 inhabitants (2011 census). Tiruchirappalli is an important industrial location, university town and administrative seat of the Tiruchirappalli district. The main attraction of the city is the Rock Fort , a fortress on a steep rock in the heart of the city. In the immediate vicinity, on a river island in the Kaveri, is the temple town of Srirangam with the Ranganathaswami temple , one of the most important Hindu shrines in Tamil Nadu.

View from the Rock Fort on Tiruchirappalli, the Kaveri River and Srirangam

Tiruchirappalli is located in the center of Tamil Nadu, 320 kilometers southwest of Chennai (Madras), the capital of the state. The city is the administrative seat of the Tiruchirappalli District . The river Kaveri (Cauvery), the most important river in Tamil Nadu, flows through Tiruchirappalli . At Tiruchirappalli the Kaveri divides into two arms, of which the northern one is called Kollidam (Coleroon) and the southern one keeps the name Kaveri. To the east of Tiruchirappalli, the river branches further into a broad estuary delta.

The area of ​​the municipality of Tiruchirappalli ( Tiruchirappalli Corporation ) covers 146.7 square kilometers and can be divided into three areas: The old town of Tiruchirappalli extends on the south bank of the Kaveri at the foot of the 83-meter-high steep rock on which the Rock Fort is built. To the south of the densely built-up old town is the new town ( cantonment area ), which was laid out during the British colonial era . In the north, on a river island between Kaveri and Kollidam, is the temple town of Srirangam , which administratively also belongs to Tiruchirappalli. 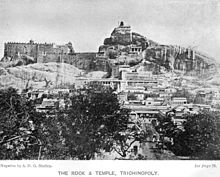 View of the Rock Fort and Tiruchirappalli in 1913

Uraiyur , now a suburb of Tiruchirappalli, was the capital of the early Chola rulers. It was founded in the 3rd century BC. Mentioned in the Ashoka inscriptions and in the 2nd century AD by the Greek geographer Claudius Ptolemy as Orthura ( Ὄρθουρα ). After the invasion of the Kalabhra , the Chola dynasty disappeared in the 3rd century. In the 9th century, the Chola, now from Thanjavur , rose again to become the most powerful empire in South India and also ruled the area of ​​Tiruchirappalli. After the decline of the Chola in the 13th century, the area was controlled by the Hoysala , then the Pandya of Madurai and the short-lived Sultanate of Madurai , before coming under the rule of the Vijayanagara Empire in 1372 . After the decline of Vijayanagar made Tiruchirappalli came under the control of the Nayaks of Madurai in the 16th century, who had been installed as military governors by the Vijayanagar rulers and who now filled the power vacuum that had developed (see Nayak dynasties ).

The main language in Tiruchirappalli is, as in all of Tamil Nadu, Tamil , which according to the 2001 census is spoken by 89 percent of the population as their mother tongue. 5 percent speak Telugu , 4 percent Urdu and 2 percent speak other languages.

The Rock Fort in Tiruchirappalli

The main attraction of Tiruchirappalli City is the Rock Fort , a fortress on the steep 83 meter high rock, at the foot of which the old town of Tiruchirappalli extends. The fort in its current form was built during the Nayak period in the 17th century. Its origins go back further into the past, as two cave temples from the Pallava period in the 6th century show. The Thayumanavaswami Temple, dedicated to the god Shiva , halfway up the rock, was celebrated in the 7th century by the poet saint Sambandar . This makes it one of the holy places of Tamil Shaivism ( Padal Petra Sthalams ). The Uchi Pillayar Temple, dedicated to the god Ganesha , is located on the tip of the rock spur . 437 stairs lead to the summit, from where there is a wide view of Tiruchirappalli and across the Kaveri River to the temple of Srirangam. 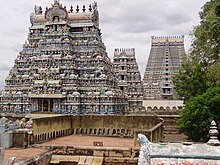 Gopurams of the temple of Srirangam

On the opposite side of the river, on a river island, is the temple city of Srirangam . The Ranganathaswami Temple of Srirangam, dedicated to the god Vishnu , is the most important of the Vishnuit shrines ( Divya Desams ) in Tamil Nadu. It is also an outstanding example of the Dravidian temple style . The temple complex covers an area of ​​960 × 825 meters; it is enclosed by seven concentric wall rings with 21 gopurams (gate towers), the highest of which is 73 meters high. The actual sanctuary is located in the area between the four innermost wall rings, the outer areas form a district with streets, houses and shops, mainly inhabited by Vishnuit Brahmins . This makes Srirangam the ideal example of a south Indian temple city. In addition, there is an important Shivaitic sanctuary in Srirangam with the Sri Jambukeshwara temple, which is consecrated to Shiva.

Tiruchirappalli is an important industrial location. In the city there is a metalworking factory of Bharat Heavy Electricals , which makes industrial steam boilers , a locomotive factory of Golden Rock Locomotive Workshops , a chemical factory of Trichy Distilleries and Chemicals Limited , a steel mill of Trichy Steel Rolling Mills and, since 2010, an IT park . The Indian Ordnance Factory Tiruchirapalli (OFT) is also located there. She manufactures u. a. the South African Anti-Materiel Rifle Denel NTW-20 under license as Vidhwansak .

In the field of education, Tiruchirappalli is home to a university and a technical college. The Bharatidasan University was established under public ownership 1,982th The National Institute of Technology, Tiruchirappalli is part of the network of 30 national technical universities ( National Institutes of Technology ), which are maintained by the Indian central government. There are also numerous colleges in Tiruchirappalli , of which St. Joseph's College, founded by Jesuits in 1844, is the most traditional.