The Pallava were an ancient Indian family, existing around the middle of the 3rd century, which in its heyday from around 575 to 897 represented an important South Indian power and also left an important mark in the artistic field.

maximum extent of the Pallava Empire

Researchers do not agree on the origin of the Pallava. The name Pallava is derived from Sanskrit and means something like "branch". Among the Tamils, the Pallava kings were called Thondamans (also "branch") or Thondaiyarkon . These can be found in various place names and royal names. 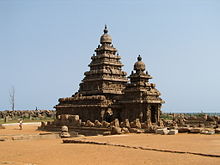 The coastal temple of Mamallapuram is considered to be the oldest open-air temple in South India (around 690).

There is a presumption that the Pallavas originally came from Sri Lanka . The Sangam literature reports that a Naga princess from Manipallavanam in the Jaffna region married a prince of foreign origin, the Chola king Killivalavan. Therefore, this theory assumes that the Pallavas were a branch of the Chola. A legend of the Parthians is not unlike this representation. Most of the Pallava Empire was in what is now Andhra Pradesh . The Mahavamsa reports that a group of Buddhist monks from Pallava Boga were in Sri Lanka for a certain festival. Some scholars are of the opinion that Pallava Boga is a place of the former Kala Dominion in Andhra Pradesh. Other scholars see Pallava Boga as a place in the ancient Persian Empire . There is also the Talagunda -Inschrift who testified that the Pallavas from the Kshatriya - caste come. The indigenous thesis that they came from what was then the Pallava area also leads to a theory that they were earlier vassals of the Vakataka empire.

The first Pallava rulers had become independent in the last years of the disintegrating Satavahana empire. Skandavarman I extended the empire over the country south of Madras and made Kanchipuram the capital there (around 400). In the third quarter of the 4th century, the Gupta conqueror , King Samudragupta (ruled 335-375) went to the field against the Pallava Visnugopa (ruled approx. 350-355) and claimed to have won. In spite of this, the Pallava Empire continued to expand, even if it gained little importance alongside the Gupta-Vakataka Imperial Association; his successor made the Banas, Kadambas and Gangas vassals. In the 5th and 6th centuries, the dynasty was weakened by the separation of the Kadamba Empire under King Kakusthavarman (ruled approx. 425-450) and the rise of the Ganga dynasty in Talakad, Karnataka . The Ganga king Durvinita (approx. 495-535), an ally of the Chalukya , even took a Pallava king prisoner.

Rathas in Mamallapuram, a port through which trade with Rome was carried out as early as the 1st century. During the Pallava period, merchants sailed from here to the coasts of Southeast Asia, twice even with the war fleet to Sri Lanka .

Mahendravarman lost the home province Andhra (with Vengi ) forever to the Chalukya, but was able to repel their king Pulakesin II before Kanchipuram. His son Narasimhavarman (r. Ca. 630-660) conquered 642 the Chalukya capital Vatapi ( Badami ), the Chalukyakönig Pulakesin II. Was killed, and extended his power to Sri Lanka , where he had fled to his court a prince began as king. Narasimhavarman also founded the temple complex of Mamallapuram , which was carved out of granite rocks and is famous for its sculptural decorations. He is also said to have written plays in Sanskrit .

His successor Mahendravarman II (ruled approx. 660–70) had a quiet government; but Paramesvaravarman (r. approx. 670-85) had to deal again with the Chalukya under their king Vikramaditya I (r. 654-680), but remained successful in three battles despite the temporary loss of his capital (674) with the help of the Pandya .

The Pallava are at least partially assigned to the Tamils . The capital was Kanchi or Kanchipuram near today's Madras , where the oldest and most famous university in India was located. B. was visited around 635 by the Chinese pilgrim Xuanzang . The Pallava promoted Sanskrit in the south, in their inscriptions first Prakrit dominated , later Sanskrit and finally Tamil . Above all, they were supporters of Shaivism . The economic and cultural influence of the Pallava reached through its seaport Kadal Mallai (alias Mamallapuram) to the Malay Peninsula as well as to Java and today's Cambodia .

A civil war that led to the accession to the throne of King Nandivarman II (ruled approx. 710–775) also caused the Pallava power to fall apart. The Chalukya ruler Vikramaditya II (ruled 733-46) even conquered the Pallava capital Kanchipuram in 740; after him came the Rashtrakuta under Dantidurga (ruled approx. 754–757) and Govindra III. (ruled approx. 794–813), so that the capital was lost to foreign powers three times.

The Chola became independent again around 850 and around 885 their king Aditya (r. 871-907) took over the land of the last Pallava king Aparajita and killed him in a knightly duel on elephants (897). The family continued in vassal status into the 13th century.

Despite individual suggestions from outside, the Pallava architecture , which began around 620, is one of the most impressive and original creations of Indian architecture. Her artistic centers were Mamallapuram and Kanchipuram . The greatest builder of the dynasty was Narasimhavarman II. Rajasimha (ruled approx. 685-705), who ruled a peaceful quarter of a century and to which several temples with stepped roofs in the manner of step pyramids are ascribed. This style was imitated decades later among the Chola and in Java at Hindu temples .

The Mandagapattu rock temple, commissioned by Mahendra Varman I around 620 and consecrated to Trimurti ( Brahma , Shiva and Vishnu ), is considered the oldest preserved stone temple in South India.