The title of this article is ambiguous. Further meanings are listed under Brahma (disambiguation) . 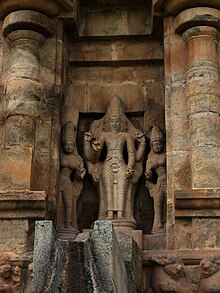 Brahma ( Sanskrit , m., ब्रह्मा brahmā ) is the name of one of the main gods in Hinduism . The other main gods are Vishnu (preservation) and Shiva (destruction), with these two Brahma forms the Trimurti . His wife is Sarasvati .

In the Trimurti, Brahma represents the principle of creation . The connoisseurs of Brahman (the Brahmins ) gave him special veneration as the Creator of the priesthood. Compared to the other main currents of Hinduism ( Vishnuism , Shaivism , Shaktism ), this veneration has lost its importance today. In public worship Brahma was historically behind all other deities, but in mythology he still plays an important role today. Brahma is considered to be the founder of one of the four classic Vaishnava Guru lineages, known today as Brahma-Gaudiya-Sampradaya, which was strongly influenced by Chaitanya . He is the ideal god of creation who, as an immobile mover, helped the universal to move. It is time and is subject to it.

According to various textual traditions, Brahma emerged from the cosmic gold egg Hiranyagarbha , which swam on the waters of the primeval ocean, or arose from a lotus that emerged from the navel of Vishnu - Narayana . Out of himself he created his daughter Shatarupa (sometimes equated with his companions Sarasvati or Gayatri ), whom he desired so much that - in order to be able to see them at all times - his heads grew in all four directions and in addition a fifth, which he, as punishment for the incest committed , was repulsed by Shiva and from which Manu , the progenitor of all human beings, emerged.

His role as a creator god created out of himself is called into question by various legends: On the one hand he is the creature of Pitamaya , another primordial being in Hindu mythology; at other times he is only the creature of Narayana, resting on the world serpent ananta or shesha . Because of his gullibility or vanity, Brahma falls for the tricks of the demons ( asuras ) - Vishnu has to remedy the disturbances of the worldly and divine order caused by this in his forms as boar ( varaha ) or man-lion ( narasimha ) (cf. also Hiranyaksha or Hiranyakashipu ).

The personal deity Brahma has its existential origin in the idea of Brahman , a formless ( arupa ), attributeless ( nirguna ) and unknowable ( acintya ) entity. The personification of this intangible power took place linguistically only through the shifting of the accent and the resulting change of gender; in terms of content, the desire for an omnipotent Creator God, who had to have a clearly identifiable consciousness and a defined external form, was decisive. However, since the Veda did not transmit anything about a deity with the name Brahma, this had to be identified with already existing deities proven by the Veda. For this purpose, a hitherto nameless god with the title "Lord of the Creatures" ( Prajapati ) offered himself , who was henceforth assigned to Brahma.

The newly created deity Brahma experienced a further legitimation through the association with the already known idea of ​​a golden and immortal embryo ( hiranyagarbha ), which ruled both life and death and was authorized to instruct other deities. Furthermore, this deity was considered to be the creator of earth and heaven. This personified creator deity is mentioned in the Rigveda especially under the names Prajapati and Purusha , in later times under the names Bhagavan or Ishvara . This history of development shows for the first time approaches to monotheistic thinking , which from this time on established itself as the opposite of monistic thinking , as well as the emerging hierarchization of the gods, according to which Brahma was superior to all other gods.

As a further approach to understanding a Brahma, the explanation derived from the teachings of the Buddha should be mentioned here. Man is able to achieve different states of concentration (so-called Jhanas) through meditation. If the human mind is immersed in such a state, this person experiences certain sensations (e.g. all-embracing love). If a being dies in or with this state of consciousness and feels the desire to reappear in such a plane of existence, it can be reborn as a so-called "Brahma". The “purer and more stable” a Jhana becomes, the finer the plane of existence with which this being can come into relationship (resonance). The existence of the beings there is much longer than in the human world and the state of consciousness of such a being corresponds to the state that a person with a corresponding Jhana experience (Jhana experience) would experience in the here and now. In Hinduism it was (is) an ideal to live one's life in such a way that it leads to the (kingdom of) Brahma.

Brahma and Sarasvati - under the foot of his bent leg his mount ( vahana ), the goose ( hamsa ); Chitragupta Temple in the temple district of Khajuraho (11th century)

Brahma is usually shown with four faces and four arms as well as with a prayer wreath and Vedas (oldest Indian literature collection). Early medieval sculptures show him without a beard; since 11/12 In the 19th century he was often depicted with a beard. Sometimes it appears on a lotus flower that rises from the navel of the god Vishnu- Narayana, who rests on the world serpent ananta or shesha .

The most important attributes of Brahma are the square, yoni- like ladle ( shruk ), which was important in the Brahmins' sacrificial ceremonies, the sacrificial jug with a handle ( kamandalu ) and a palm leaf manuscript ( pustaka ).

His symbol and companion animal ( vahana ) is the mystical goose ( hamsa ), which can fly him to any desired location in the universe as quickly as possible. She is also depicted above the entrance gate of his most important temple in Pushkar, India, dating from the 14th century.

Some sculptures show him together with his wife Sarasvati (or Savitri or Gayatri ).

Various words are reflected in the literature, some of which are used in the same word form, but have nothing to do with the Brahma discussed here :