Photopic vision , also called day vision or cone vision , describes human vision when there is sufficient brightness. In contrast, there is scotopic vision , also night vision or rod vision , with low brightness and the transition area, the mesopic region or twilight vision . The words are derived from the Greek phos (light), mesos (middle) and skotos (darkness). The main difference between day and night vision lies in the perception of colors during daytime vision, while if the luminance is insufficient during night vision, no colors are perceived.

Photoreceptors in the human eye for photopic vision are the cones of the retina , whereas the much more light-sensitive rods are responsible for scotopic vision. In the mesopic area, both cones and rods contribute to image perception. This color perception , which is dependent on the ability to adapt, is known as the Bezold Bridge phenomenon .

Since the rods are more sensitive to the shorter-wave color stimulus than the cones, they give a different impression of the brightness of different hues than the cones. Brightness values ​​plotted over the visible spectrum result in the V-lambda curve and the associated brightness sensitivity between day and night vision is the Purkinje effect . This leads to a change in color perception, which is particularly noticeable in twilight, as soon as the dark adaptation begins. 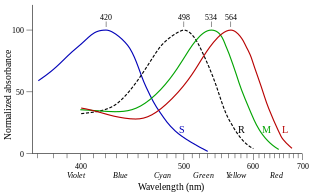 In particular, some shades of blue appear much brighter in twilight vision. Therefore, in artistic representations or in lighting for film and television recordings, the night mood is often used with a higher proportion of blue shades. This trick is called "American Night" . For the same reason, moonlight appears " colder " (more bluish) than sunlight, although the color stimulus is actually slightly redder. The color perception that disappears here is described in the proverb "At night all cats are gray".

The visual acuity is the photopic vision is greatest, especially in the area of the fovea near the center of the retina. In scotopic vision the sharpness is less; above all, details with a low contrast can no longer be perceived because the eye interpolates the brightness via neighboring rods. Since there are no rods in the area of ​​the fovea centralis, the object in scotopic vision must be outside the fovea centralis ( parafoveal vision ), so you have to "look wrong" in order to achieve the best sensitivity of the eye. In addition, the rods are slower in time than the cones. This somewhat longer adaptation in dark light conditions is the Pulfrich effect , the eye needs more time to perceive objects in the field of vision .

To convert the radiation power (in watts ) into the luminous flux (in lumens ) that can be perceived by humans in electromagnetic radiation, spectral photometric radiation equivalents are used as conversion factors , whereby a distinction must also be made between daytime and nighttime vision. Both the spectral sensitivity of the various visual cells and their differently high stimulus thresholds are taken into account in this way.

In the visible spectral range, 50 to 100 photons are sufficient to evoke a sensory impression. Only about 20 percent of the photons, i.e. H. 10 to 20, absorbed by the photoreceptors. The rest is reflected or absorbed outside the photoreceptors. A single photon can trigger a stimulus in the receptor.