The soap tree plants (Sapindaceae) form a plant family that belongs to the order of the soap tree-like (Sapindales). Most of the approximately 142 genera with around 1900 species occur in tropical areas, only a few genera are distributed exclusively in the temperate zones.

Since the family today is made up of several families based on molecular phylogenetic reasons, very few common features are known to date.

They are mostly woody plants: trees , bushes or lianas ; herbaceous plants are rarely found . They are evergreen or deciduous. The leaves are alternate and spiral or opposite to the branches. The mostly functionally unisexual flowers are four or five-fold. Most three (two to six) carpels have become an ovary grown. Very different fruits are formed. The seeds often have an aril , which can be poisonous as long as they are immature.

The soap tree plants are particularly richly developed in the tropics . They colonize all of tropical South America , Africa and Asia , as well as Australia , New Zealand and Oceania . In the temperate zones of the northern hemisphere ( North America , Europe and East Asia ) only a few genera such as the maples ( Acer ) occur.

The Sapindaceae family is divided into four subfamilies; it includes about 142 genera with 1600 to 1900 species .

Studies between around 2000 and 2009 have shown that the genera of the previous maple family (Aceraceae) and the horse chestnut family (Hippocastanaceae), classified in the subfamily of the horse chestnut family ( Hippocastanoideae ), must also be grouped in the soap tree family. Common to all Sapindaceae is originally the formation of a disc at the base of the flower , which is secondarily absent in wind-pollinated species. The four families are based on the construction of the ovary distinguished: the Sapindoideae have only a single ovule , the Hippocastanoideae have two ovules that Dodonaeoideae have two to several ovules and Xanthoceroideae six to eight ovules per ovary compartment (corresponds to a carpel) on. This corresponds to the opinion of the family Sapindaceae according to AGP II and AGP III ( Angiosperm Phylogeny Group ).

Here are the subfamilies with their genera: 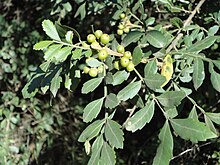 Akee ( Blighia sapida ) is also used to obtain food . Some Diploglottis TYPES provide jams and juices. The leaves and young shoots of Cardiospermum halicacabum and Koelreuteria paniculata are cooked like spinach. The flowers and leaves of yellow horn ( Xanthoceras sorbifolium ) are eaten cooked. Maple syrup is well known.

The fruit peels of the western soap tree ( Sapindus saponaria ) and the bark of Jagera pseudorhus are used to make soap. The fruits of the soapnut tree ( Sapindus mukorossi ) or products made from them are also used for washing .