Franz Troglauer (born July 8, 1754 in the market coat ; † May 6, 1801 in Amberg ) was a German robber captain and poacher in the Upper Palatinate and Franconia . 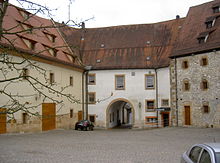 Vilseck Castle Dagestein. Franz Troglauer was in custody here in 1796/97, probably in a cell near the entrance gate.

Born and raised in the Mantel market in the Bavarian Upper Palatinate , he is said to have been a thief and robber even in his youth . After he was imprisoned in Amberg penitentiary three times for various offenses (the first time in 1786), he and some brothers and sisters joined what later became known as the “Great Franconian Thief and Robber Gang” . In this more than 180-strong gang, he quickly made it to the ringleader . In a theft in Bamberg them stolen loot worth 12,000 guilders - including the crosier of the auxiliary bishop . 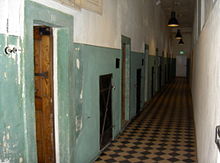 In 1796/97 Troglauer was in custody in Vilseck for stealing a horse . This city was a Bamberg enclave in Bavarian territory. Although they originally wanted him to be sentenced to perpetual imprisonment, they were content to pillory him and then expel him from the country. When the "Great Franconian Thieves and Robbers Gang" was exposed through treason in 1798 and many gang members were arrested, Troglauer had to flee across Bavaria . He was arrested in Regensburg , but was able to escape during a prisoner transport. A few weeks later he was arrested in Straubing , but was also able to escape from there. Eventually he gathered a few buddies around him and founded his own little band of robbers.

Franz Troglauer took this route to the gallows in 1801.

From 1799 to December 1800 Troglauer and his gang were up to mischief throughout the Upper Palatinate and Franconia . He was publicly wanted and had little more to lose. In revenge for earlier arrests, he wanted to murder the district judge Georg von Grafenstein auf Parkstein . Allegedly he had ambushed him several times. The government in Amberg offered 100 guilders as a reward for those who captured Franz Troglauer. Although Troglauer was wanted on a wanted list, he did not shy away from drinking publicly in the pub with his gang (in March 1800 in Hirschau ). Nobody dared to take action against these robbers in public.

He and his gang were quite modern in their methods. They had their own printer who produced false passports, letters of the nobility and other documents. The innkeepers as gang members gave shelter in many places in the Upper Palatinate and Franconia, and the innkeepers acted as fences to move the stolen things. A special predatory language was used for communication.

Many thefts and break-ins in churches are on Troglauer's account. Another crime was poaching , which was the order of the day for survival reasons alone.

In December 1800, a court usher in Freystadt near Neumarkt finally managed to arrest Troglauer. From there he was transported to Amberg, where to him the process made. On May 6, 1801, he was on the gallows in Amberg at Gallows executed .

It is difficult to judge Franz Troglauer from today's perspective. The contemporary files are difficult to judge against him. However, it must be taken into account that all the documents that have survived come from the hand of the prosecutor. Without a certain support from the population, Troglauer would probably not have been able to last that long.