Mantel is a market in the Upper Palatinate district of Neustadt an der Waldnaab about ten kilometers west of Weiden .

Mantel is located on the state road 2166 from Weiden to Freihung , the district road NEW 21 and on the Haidenaab .

The municipality has four districts:

There are also three unofficial districts:

The exact origin of the place is unknown. Mantle was first clearly mentioned in a document on September 26, 1212. Frederick II gave the Floß estate to King Ottokar of Bohemia as a thank you for his loyal service, to which Mantile (coat) also belonged. On July 13, 1654, Mantel received market rights .

There are two different theories about the origin of the name. According to a popular saying , the name can be traced back to the garment of the same name. A robber chief is said to have spread his cloak at the place where Mantel is now to share the booty. It is thought more likely that the name Mantel comes from the Old High German word for pine (mandl). Mantel is still surrounded by large pine forests today. In fact, a well-known robber captain named Franz Troglauer comes from the place . He roamed the Upper Palatinate and Franconia with his gang in the 18th century.

In 2012 the market celebrated the 800th anniversary of its first documentary mention.

In 1945 or 1946 the previously independent municipality of Rupprechtsreuth was incorporated. On July 1, 1972, parts of the dissolved Hütten community were added.

The market town of Mantel has 14 market councils, of which the CSU have appointed seven, the SPD four and the FWG three since the local elections on March 16, 2014 . Mayor was initially Josef Wittmann, CSU . Due to the application of the First Mayor for dismissal for health reasons, the Second Mayor Stephan Oetzinger was in charge of official business until further notice.

In the mayoral election on May 20, 2012, Stephan Oetzinger (CSU) was elected the youngest mayor in the Neustadt an der Waldnaab district with 73.8% of the votes in the first ballot. He took office on May 23, 2012.

After Stephan Oetzinger won the direct mandate for the constituency of Weiden in the Bavarian State Parliament on October 14, 2018, he resigned from office on November 4, 2018. Richard Kammerer was elected as the new mayor on February 3, 2019.

The market's coat of arms shows a silver coat in red with fluttering silver cords and a blue collar from the rear. The coat of arms has been known since 1615. 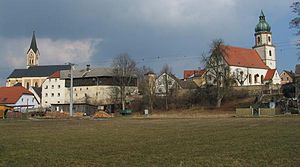 Center of Mantel, on the left the Catholic, on the right the Protestant parish church

Municipalities in the district of Neustadt an der Waldnaab