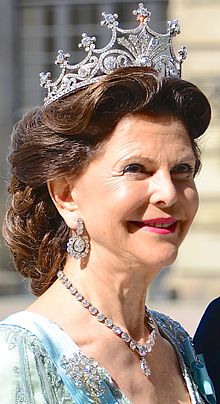 Queen Silvia of Sweden (* 23. December 1943 in Heidelberg as Silvia Renate Sommerlath ) is the wife of King Carl XVI. Gustaf and mother of the heir to the throne, Crown Princess Victoria . In 2011, Silvia became Sweden's longest-serving queen, a record previously held by Sophia of Nassau .

Silvia Renate Sommerlath was born in Heidelberg as the daughter of Walther Sommerlath (1901–1990) and his Brazilian- born wife Alice Soares de Toledo (1906–1997) and has three older brothers Ralf, Walther and Jörg († 2006). She grew up in São Paulo between 1947 and 1957 . In 1957 the family returned to Germany. Among other things, Silvia attended the Elisabeth von Thadden School , a private school in Heidelberg-Wieblingen . In 1963 she graduated from the Luisen-Gymnasium Düsseldorf , and from 1965 to 1969 she attended the Language and Interpreter Institute in Munich. In addition to Swedish and German, she speaks French, Spanish, Portuguese, English and Swedish sign language . She worked in the Argentine consulate in Munich , as hostess of the 1972 Summer Olympics in Munich and as deputy chief of protocol for the 1976 Winter Olympics in Innsbruck . She is Evangelical Lutheran .

Silvia during a public appearance in Oslo (2005)

Silvia Sommerlath made the acquaintance of her future husband, Carl XVI, as a hostess at the 1972 Summer Olympics in Munich. Gustaf of Sweden, whom she married on June 19, 1976 in Stockholm's Storkyrka (engagement on March 12, 1976). Silvia's uncle, the Leipzig theology professor Ernst Sommerlath , participated in the ceremony . The day before, the Swedish pop group ABBA premiered the song Dancing Queen in a program in honor of the bride and groom on Swedish television.

Carl Gustaf had already become king in 1973; had he married the bourgeois Silvia, who was not equal under Swedish law , as crown prince , his exit from the royal family would have been necessary, combined with a loss of rank in the line of succession. However, this law only applied to princes, not to the ruling monarch.

In addition to her representative duties, Silvia is committed to helping disadvantaged and abused children. In 1999 she founded the World Childhood Foundation . In 1990 she received the German Culture Prize for her commitment to sports for the disabled, in 2002 she received the German Media Prize in Baden-Baden and in 2006 the Honorary Bambi from the publishing house Hubert Burda Media .

Queen Silvia is also the patron of a total of 62 associations. In the vicinity of Drottningholm Palace , Silvia founded the Silviahemmet (Swedish for "The Silviaheim"), in which people with dementia are cared for. In Germany, the Silviahemmet Foundation cooperates with the Maltese , who implement the Silviahemmet concept at several locations, and the St. Anna-Stift Kroge. The royal couple also set up the Royal Wedding Fund, which supports research in the field of disabled sports. 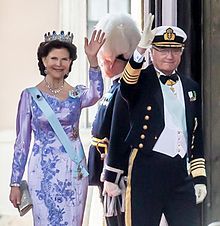 At the children's request, she received the international award as Cavalier of the Order of Smiles .

The Queen's personal coat of arms shows the same content in the main shield (in the oval lady's shield shape ) as that of the king, but the Bernadotte's heart shield is interchanged with that of the Sommerlath family: in the red and gold split shield a lily in confused colors. The royal crown rests on the main shield. The Kungliga Serafimerorden ( Royal Seraphine Order ) is placed on a blue ribbon around the main shield . The coat of arms of the Sommerlath is similar to that of the German von Sommerlatt family: a silver lily in red; on the helmet with red and silver covers six (alternating silver and red) ostrich feathers. This family comes from Thuringia and appears with Rudolfus Somerlate, councilor of the imperial city of Mühlhausen , in a document on July 3, 1297 and passed into the landed gentry in the 15th century. In 1913 it was registered in the Royal Saxon Nobility Book.