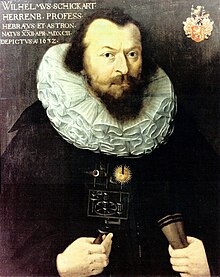 Wilhelm Schickard (born April 22, 1592 in Herrenberg , † October 23, 1635 in Tübingen ) was a German astronomer , geodesist and mathematician . He taught Hebrew and astronomy at the University of Tübingen . He also used his name in the variants Schickhart, Schickhard, Schickart, Schickardt and Latinized forms from them.

Wilhelm Schickard was born the son of the carpenter Lucas Schickhardt and the pastor's daughter Margarete Gmelin and was the nephew of the builder Heinrich Schickhardt and Wilhelm Gmelin . He attended the monastery school in Bebenhausen and was accepted into the Tübingen monastery in 1610 . At the University of Tübingen he obtained his master's degree in 1611 and then studied theology. From 1613 he was vicar in several places in Württemberg until he was appointed deacon in Nürtingen in 1614 . There he met Johannes Kepler in 1617 , who had come to Tübingen to defend his mother in a witch trial. For Kepler's work Harmonice mundi , he created several copper engravings and woodcuts.

Schickard belonged in Tübingen to the circle of friends of the chiliastic lawyer and theosophist Tobias Hess . This group also included, for example, Johann Valentin Andreae , Christoph Besold , Wilhelm Bidembach von Treuenfels , Abraham Hölzel , Thomas Lansius and Samuel Hafenreffer, as well as Johann Jakob Heinlin , who initially represented his professorship at the University of Tübingen after Schickard's death.

The portrait from 1632 shown here is in the collection of professor portraits at the University of Tübingen .

In 1619 he was appointed professor of Hebrew at the University of Tübingen. While teaching, he looked for simple ways to make learning easier for students. So he created the Rota Hebræa , a representation of the Hebrew conjugation in the form of two rotating discs that are placed on top of each other and make the respective shapes appear in windows. To study the Hebrew language, he created the Horologium Hebræum , the Hebrew clock, a textbook of Hebrew in 24 chapters, each of which could be learned in one hour. This book was Schickard's most famous book and was reprinted again and again until 1731. In 1627 he wrote a textbook for learning Hebrew in German, the Hebrew Funnel .

Replica of the calculating machine by Wilhelm Schickard

In addition to teaching Hebrew, he also studied astronomy. In 1623 he invented an astroscopium , a cone made of paper, inside of which the starry sky was depicted. He developed u. a. a theory of the lunar orbit , which provided the most precise ephemeris of its time. He was the first to determine meteor orbits from simultaneous observations from different locations. His graphic methods for calculating eclipses and for calculations in the Copernican system were widely used.

Schickard was a talented mechanic and often built his own instruments - which is why Kepler called him a two-handed philosopher in a letter . In 1623 he built the first calculating machine (which he called calculating clock ) to make astronomical calculations easier. The machine was capable of adding and subtracting up to six-digit numbers, and signaled a "memory overflow" by ringing a bell. In order to enable more complex calculations (multiplication, division), Napier's arithmetic rods (also called Nepersche rods) in the form of cylinders - similar to the later calculation boxes by Caspar Schott - were attached, which were used to support the further calculation steps on the adding machine. The construction was lost by the 20th century, and a working replica was not made until 1960. References to the machine, including drawings by Schickard, were found in the estate of Kepler (Schickard promised Kepler a copy that was destroyed by fire) and in the estate of Schickard himself. Schickard knew Napier's writings and was himself an early representative of the use of logarithms.

From 1624 he began to re- measure the country on his travels through Württemberg as a school supervisor for the Latin schools . So that others could support him, he wrote an instruction in 1629 on how to make artificial land boards. He used the method of geodetic triangulation, which Willebrord Snell had invented a few years earlier .

In 1631 the astronomy professor Michael Mästlin died and Schickard was appointed as his successor. From then on he gave the astronomical lectures. One of his most important works concerned the theory of the motion of the moon. To calculate the lunar orbit, he published the Ephemeris Lunaris in 1631 , with which one could graphically determine the moon position in the sky at any point in time. He was a staunch supporter of the heliocentric system and invented the first hand-held planetarium to represent it , which is shown in his portrait from 1631. In addition to Kepler, he corresponded with astronomers and scientists such as Ismael Boulliau and Pierre Gassendi .

After the battle of Nördlingen in 1634, the imperial troops also occupied Tübingen, and with them came the plague . In the autumn of 1634, Schickard's mother first died of abuse by soldiers, then his wife and three daughters died of the plague, leaving only his nine-year-old son. Schickard, who fell ill with the plague himself at the turn of the year and recovered, managed to come to terms with the occupying forces. On behalf of Count Gronsfeld , who was interested in his mathematical and even more in his geodetic work, he carried out measurements in the Stuttgart – Herrenberg – Tübingen and Sinzheim – Bruchsal – Pforzheim area from February to July 1635. He fell ill again in mid-October, died on October 23, 1635 and was buried the following day, his son the next day. His neighbor and godfather of his children, Thomas Lansius , kept the estate tied up in his cellar for several years until Schickard's brother Lucas could take it over.

The lunar crater Schickard was named on his lunar map by Giovanni Riccioli as early as 1651 .

Replica of the hand planetarium by Wilhelm Schickard

The sketch of the calculating machine shown here can be found in Schickard's sketchbook in the Württemberg State Library in Stuttgart. The machine was reconstructed by the Tübingen logician Bruno von Freytag-Löringhoff in 1957. Reconstructed copies can be viewed in the Tübingen city museum , in the computer museum of the Wilhelm Schickard Institute for Computer Science in Tübingen and in the Arithmeum in Bonn . The mechanism of his calculating machine can also be tried out in the Heinz Nixdorf MuseumsForum (computer museum ) in Paderborn. The Wilhelm Schickard Institute for Computer Science named after him is located at the Eberhard Karls University of Tübingen .

In 1989, the Research Society for Watch and Precision Engineering, founded in 1955, was established in the Hahn-Schickard Society for Applied Research in honor of Wilhelm Schickard and Philipp Matthäus Hahn . V. (HSG) renamed.

In the Technologiepark Karlsruhe there has been a Wilhelm-Schickard-Straße since 1993.