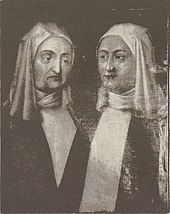 Both sisters were accepted into the monastery as canonesses in 1531 . In the same year Margarete became dean and, while maintaining this office, also abbess of the Neuenheerse monastery in the diocese of Paderborn in 1534 .

Magdalena, mentioned as provost since 1538 , was elected abbess of Gandersheim on August 12, 1547. She fought against Duke Julius von Braunschweig-Wolfenbüttel , who tried to bring the imperial direct pen, which had become Protestant under his pressure , under his control in 1568 . Magdalena, who remained Catholic, was imprisoned by him after the monastery building was occupied and died in custody on the night of January 28th to 29th, 1577.

Her sister Margarete, who also remained Catholic, was elected her successor in 1577, but had to live in the Neuenheerse Abbey for more than 11 years because the Duke did not want to recognize the unyielding woman as Gandersheim's abbess and instead his daughter Elisabeth , later Margarete von Warberg, took the lead of the pen wanted to choose. Only on February 16, 1588, her election was recognized by Duke Julius, probably through the mediation of his wife Hedwig of Brandenburg . She died on April 10, 1589 and was buried next to her sister. Her successor as abbess was on 23 April 1589 since 1577 acting as a dean and from the Protestant Count House Waldeck originating Anna Erika von Waldeck .

Abbesses of the Gandersheim Monastery