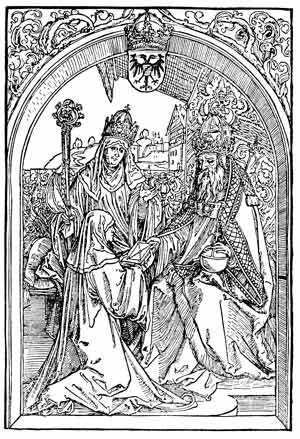 Hrotsvit von Gandersheim presents Emperor Otto the Great with her “Gesta Oddonis” ; in the background Gerberga, abbess of the Gandersheim monastery . Fantasy representation of a woodcut by Albrecht Dürer from the editio princeps of the "Opera Hrotsvite" , Nuremberg 1501.

Gerberga from Gandersheim . also Gerbirg , Gerburg , (* around 940; † 13/14 November 1001 in Stift Gandersheim ) was the second daughter of the Bavarian Duke Heinrich I and his wife Judith of Bavaria . Emperor Otto I's niece came from the Bavarian branch of the Liudolfinger family .

Gerberga's life dates are not exactly known. The approximate year of birth 940 has to be deduced from sources; One source gives the date of death as November 13th, 1001, another as November 14th, 1001. Gerberga was handed over to the Gandersheim monastery for education very early on and became abbess there in 956 . Politically, she supported her brother Heinrich "the brawler" in his attempts to achieve greater participation in power in the empire for the descendants of Heinrich I.

Gerbergas Abbatiat was shaped by the fact that King Heinrich I founded the Quedlinburg Abbey in 936 as the second place of Liudolfingian memorial care, with which Gandersheim fought for the favor of the heads of the families. There was further competition for the lordly favor through the Essen monastery , which was not a Liudolfingian foundation, but with Hadwig , Ida and especially Mathilde was also run by abbesses from the family. Against this background, the historical works of Hrotsvits were created in Gandersheim : The "Gesta Ottonis" were supposed to win Otto I's favor , the "Primordia coenobii Gandeshemensis" hold up the tradition of Gandersheim as the oldest Liudolfingian foundation. Due to Gerberga's support for Heinrich the Quarrel, Gandersheim temporarily lost its close proximity to the ruler, but Gerberga received Otto II's daughter Sophia for upbringing, who was probably chosen as Gerberga's successor. When Sophia was dressed as a Sanctimoniale , the "Great Gandersheim Dispute" broke out, in which it was discussed whether the Gandersheim Monastery was subordinate to the Diocese of Hildesheim or directly to the Archdiocese of Mainz . It is believed that Sophia's refusal to be clad by the Bishop of Hildesheim was influenced by Gerberga.

Towards the end of her life, Gerberga seems to have been ill for a long time. Her brother Heinrich "the quarrel" died in 995 while visiting the sick in Gandersheim. Her chosen successor Sophia, who was at the court of her brother Otto III. had stopped, returned to Gandersheim in 997, although it is unclear whether Sophia fell out of favor or actually wanted to take care of her sick abbess. According to sources, which, however, describe Sophia otherwise unfavorably, Sophia is said to have taken over the government of Gandersheim Monastery while Gerberga was still alive.

Abbesses of the Gandersheim Monastery