The title of this article is ambiguous. Additional people with this name are listed under John Napier (disambiguation) . 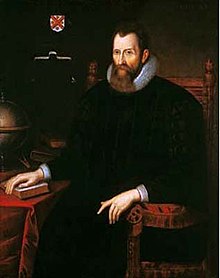 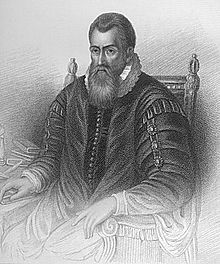 Napier was the eldest son of the Scottish Baron Archibald von Merchiston and received his education first at the University of St Andrews . Afterwards he probably traveled to Europe and acquired knowledge in mathematics and literature. In 1572 he received many of his father's lands. After studying theology, he also worked as a Protestant pastor. In religiously divided Scotland, he repeatedly attacked the Catholic Church and saw the Pope as an antichrist.

Napier and the Swiss Jost Bürgi developed the logarithm at about the same time, but independently of one another, as a calculation tool (1614, 1620) that was in use for centuries. In contrast to Bürgi's logarithms, which were hardly taken into account, Napier's invention was eagerly studied by scholars and, above all, rapidly developed by Henry Briggs (1556–1630).

Napier pursued the goal of being able to perform spherical trigonometric calculations purely logarithmically. For this purpose he developed important theorems of spherical trigonometry such as the half-angle theorem or Napier's analogies ( Logarithmorum canonis descriptio, 1620, pp. 47, 56). Napier's rules named after him are a concise summary of arithmetic formulas already known at the time for the right-angled spherical triangle , for which Napier gave an elegant proof ( Logarithmorum canonis descriptio, 1620, p. 56).

The Napier computing sticks had a significant impact on the development of computing machines . They made it possible for Wilhelm Schickard to build the first mechanical calculating machine.

In his honor, the auxiliary unit of measurement (pseudo- measure ) for damping electrical and acoustic vibrations was named Neper , but recently it has been increasingly replaced by the bel or decibel . In addition, the nit , a dimensionless unit of data volume that is no longer in use , was named after Napier .

One of the Edinburgh-based universities bears his name in his honor, Edinburgh Napier University . The university has several campuses all over the city . The Merchiston Campus, the university's oldest campus , grew up around Merchiston Castle , the birthplace and death place of John Napier.

The moon crater Neper is named after him. The same applies to Napier Island in Antarctica.