Léon Foucault was born on September 18, 1819, the son of a publisher in Paris and attended the Stanislas College there from 1829 . He received his training from a private teacher , since he had been advised to leave school for lack of diligence and good behavior. He began studying medicine , but had to break it off because he couldn't get over the disgust when dissecting . Through the influence of the physicist Hippolyte Fizeau of the same age , he found interest in and access to physics and astronomy. Without a university degree, he devoted himself to physics and acquired extensive knowledge and skills on an autodidactic basis .

Play media file
The Foucault pendulum in the Panthéon

In the 1840s he contributed to the scientific journal Comptes rendus de l ' Académie des sciences, describing an electromagnetic regulator for the electric arc lamp , and published a paper on binocular vision with Henri Victor Regnault . Furthermore, in 1845 he succeeded in creating the first usable daguerreotype of the sun, which was an extremely important contribution to further astrophotography at that time. In 1851 he presented the Foucault pendulum named after him to the public. After several attempts in the Paris observatory, he fastened a 67 meter long rope with a weight of 28 kg in the dome of the Pantheon in Paris. Under the tip of the pendulum, he marked the stand on the floor at rest. But since a pendulum, according to his thoughts, maintains the plane of oscillation, the position of the pendulum above the marking changes due to the rotation of the earth. The result was visible after just a few minutes of the experiment. The presentation of this experiment, carried out by Vincenzo Viviani in 1661, illustrated the earth's rotation .

In the years 1850–1851, with the help of the rotating mirror method he developed, he succeeded in measuring the speed of light very precisely , which he determined to be 298,000 km / s - five percent lower than Hippolyte Fizeau's result in 1849. He used a rotating mirror which resembled that of Sir Charles Wheatstone . In his experimental set-up, he let a thin bundle of light hit a rapidly rotating mirror, the light being deflected by a certain angle. From this, Foucault calculated the speed of light. In addition, he proved in 1853, also with the rotating mirror method, that the speed of light in water is lower than in air , which at the same time confirmed the hypothesis of the wave nature of light. In optics , the Foucault cutting edge method he developed is still used today to test optical surfaces or entire optical systems. Foucault also studied eddy currents in metals, for which he received the Copley Medal in 1855 . In the same year he became an employee of the Paris observatory. He developed a powerful telescope and, based on Johann Gottlieb Friedrich von beans Bergers gyroscope of 1810, in the years 1851-1852 the gyrocompass .

In 1862 he published various results of his long-term research. He was admitted to the French Academy of Sciences in 1865 . 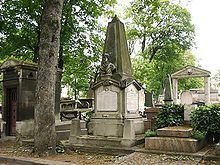 Grave of Jean Bernard Léon Foucault in the Montmartre cemetery

At the age of 48, Foucault suffered a serious illness from which he first felt numbness in his hands in October 1867. It progressed rapidly until he died, almost blind and mute, on February 11, 1868 in Paris . The exact cause of death is unclear, although a rapidly progressing case of multiple sclerosis , a stroke or the aftereffects of his long-term experiments with chemicals, especially mercury , are assumed.