A gyroscope , also known as a gyro stabilizer or gyroscope ( Greek γύρος gyros , German 'rotation' and σκοπεῖν skopein 'see'), is a rapidly rotating, symmetrical top that turns in a movable bearing. The bearing can be a cardanic suspension or a frame in the form of a cage (see illustration). Due to the conservation of angular momentum , the gyroscope has a high degree of inertia with regard to changes in position in space. If the speed of rotation between the top and the cage is measured, it is called a gyrometer . Gyroscopes are used as navigation instruments and for active attitude control, especially in the aerospace industry. The attitude control of spacecraft such as satellites makes use of the fact that the overall system of spacecraft and gyroscope maintains its angular momentum and thus the position can be controlled by transmitting angular momentum between the two.

The term gyro or gyro is currently used in a transposing manner for a large number of rotation rate sensors that do not contain any gyros, but fulfill the same purpose as an actual gyro instrument.

The gyroscope - today the terms gyroscope and gyro compass are used synonymously - was invented in 1810 by the professor of physics , mathematics and astronomy Johann Gottlieb Friedrich von Bohnenberger at the University of Tübingen ; a copy was first rediscovered in 2004 by Alfons Renz, private lecturer at the Biological Faculty of the Eberhard Karls University in Tübingen, in the Kepler-Gymnasium Tübingen. In 1852 Léon Foucault developed the gyroscope up to the design and manufacture of the gyrocompass, whereby the first gyroscope from 1810 is indistinguishable as an idea and was an essential basis for the invention of the gyrocompass in 1852.

The following measuring principles are therefore possible on the gyro :

The two laws are the basis of all gyro instruments: The first sentence is a consequence of inertia , the second set of a series of swirl set (set of angular momentum) .

The effect is also referred to as a directional top; important technical applications are the artificial horizon and the course top in aviation. In practice, every smallest imbalance causes the gyro axis to slowly migrate (gyro drift ), which can be more or less reduced by certain measures.

Precession is used on an even wider scale: u. a. as a manipulated variable for tasks of mechanical stabilization, for the gyrocompass of nautical science or for the surveying gyro ( direction- seeking or north-looking gyro), or for instrument flight with the turning pointer .

Gyroscopic instruments are widely used in traffic engineering , especially for orientation and navigation . 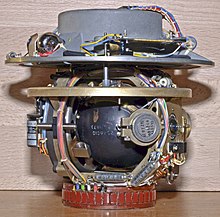 A gyroscope from an airplane

In any gyro system, however, every small imbalance would lead to an increasing gyro drift over longer periods of time , which would be very disruptive, especially in aviation. Therefore, magnet-based gyrosyn devices are being developed, which stabilize the direction measurement over a longer period of time.

Position control is also important in other areas (whereby the gyroscope can also stand for rotation rate sensors, which are not actually based on gyroscopes):