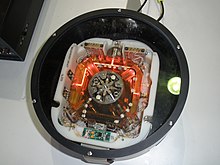 Ring laser in a gyroscope

If a laser is not operated with a linear resonator delimited by two parallel mirrors, as is usually the case, but with a resonator that runs back into itself in a ring in one plane, it is called a ring laser . The ring shape can be realized by a suitably laid glass fiber or by an arrangement of several mirrors. The standing wave generated in the resonator maintains its direction in space when the arrangement is rotated in its plane. A device that allows the standing wave to be observed can therefore be used like a compass to observe direction and changes in direction. It is therefore as a laser gyro referred to the part of word "gyros" on " gyrocompass to" remember. A laser gyro does not contain any moving parts, works wear-free and is highly accurate. The Sagnac interferometer , which is occasionally mentioned in this context , differs from the laser gyro in that it couples light from a stationary light source into the rotatable part of the arrangement and measures not its direction but its angular velocity.

Principle of a laser gyro

A ring laser consists of a ring-shaped closed resonator in which a section is built to amplify the radiation by means of stimulated emission (laser). Since all other rays cancel each other out through superposition, only those rays ( modes ) that form a standing wave remain for further amplification . This results in two oppositely circulating beams of the same wavelength, each coherent. The amplifier path must introduce at least as much energy into the wave that the losses are compensated, which z. B. caused by the mirror that is not 100% reflective. In contrast to the normal, linear laser, in which the limiting mirrors force oscillation nodes, in the ring laser the phase, i.e. the position of the maxima and minima of the standing wave, is random. A standing wave presupposes that the oppositely circulating rays have paths of exactly the same length. When turning, however, one path would be temporarily lengthened and the other shortened. Once created, the standing wave therefore very persistently maintains its position in space. The use of the arrangement as a “compass” (more precisely: course top) is based on this. The wave can hardly be observed directly, however, since the introduction of a screen, for example, which is supposed to show the maxima, would extract more energy from the circulating light than the amplifier path can supply; the wave would collapse. In order to still observe the standing wave, one decouples such a small proportion of the rays circulating in both directions that the amplifier path can replace the loss, and these partial rays are brought to interference at a detector.

Effect and observation of changes in position

Since the decoupled partial beams have the same frequency as the standing wave and are firmly coupled in phase, the standing wave itself is observed indirectly with the interference fringes . If the arrangement is rotated in the plane of the beam path, both partial beams travel through the observation field and thus indicate the rotation of the device. Such an expansion turns a ring laser into a laser gyro.

Special requirements for the structure

When arranging the mirrors, it must be taken into account that a standing wave can only be created if the length of the light path is an integral multiple of the wavelength. Different light beams follow different parallel paths in the resonator, which consequently all have to have exactly the same length. Geometrically speaking, this is not a problem with square resonator rings. With triangular ring resonators, as shown in one figure, the condition can only be met if the standing wave passes through the resonator twice, which is not noticeable during operation. Incidentally, the requirement to give all light paths the same length means that the mirrors must be adjusted very precisely.

A particularly inexpensive design replaces the circuit formed by several mirrors with a glass fiber between the laser diode and the photodiode, which can be laid several times in a circle to increase accuracy. This bypasses the problem of precisely adjusting mirrors.

A fundamental problem arises at low rotation rates , the lock-in effect : not only reflection and transmission occur at every mirror , but also scattering . A small part of the scattered light is coupled in the opposite direction of rotation.

In principle, this non-linearity would not be a problem as long as you only want to measure rotation rates above the lock-in threshold - you could calculate the effect out. However, the lock-in threshold is not constant, it depends on the strength of the scattering, and the scattering is influenced, among other things, by the number of dust particles on the mirrors. In addition, the waves backscattered from the four mirrors interfere with one another. Depending on the phase, this leads to amplification or weakening.

As a result, the backscatter and thus the lock-in effect are extremely dependent on the distance between the mirrors. They must also be very stable and built on a base plate with extremely small thermal expansion. In addition, the temperature must be kept very constant.

In order to circumvent the lock-in effect, in aviation technology, for example, the complete laser gyro is set either in rotation at a constant angular speed ( rate bias technique ) or in a trembling oscillation ( dithering ). This means that rotation is measured even when the carrier system is at rest and is always well above the lock-in threshold.

Laser gyroscopes are used in the aerospace industry , but also in military land vehicles and on naval ships as a navigation aid and are mostly part of an inertial navigation system ( INS ). For the three-dimensional determination of the position, at least three laser gyroscopes are required, which are installed in three mutually perpendicular planes. On civil commercial aircraft, they are increasingly combined with GPS receivers , since certain positions are more precise in the long term using GPS and positions are more precise in the short term using INS. The systems thus complement each other.

In military aircraft and civil commercial aircraft , they are still important as additional security in the event that the GPS (Global Positioning System) should fail or be disrupted. In the military sector, it is also advantageous that the laser gyro does not require any ramp-up time like a mechanical gyroscope ( course top , gyroscope ). Gyroscopes or gyroscopes are often redundant, however, because they work mechanically and therefore retain their directional information even in the event of a power failure.

In private aviation one is often content with mechanical course gyroscopes for reasons of cost.

Ring lasers are also used in geodesy to measure the rotational component of earthquakes and to continuously measure the earth's rotation . Here, a stationary ring laser is used and an effort is made to keep the lock-in threshold constant through complex air conditioning .

In commercial applications, the laser gyro is used in the measurement of pipelines or cameras on aircraft for airborne measurement of objects such as buildings or landscape topologies ( LIDAR or ortho-photogrammetry) or in the precise navigation of drilling rigs in the area of ​​horizontal drilling underground (so-called No. -dig line construction ).

Underwater robots are also navigated with laser gyros when the highest level of accuracy is required for autonomous missions over many hours or days.