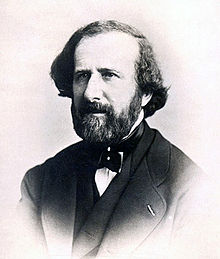 Fizeau worked as a private scholar in physics and astronomy . In 1860 he was accepted into the Académie des Sciences , in 1878 he was elected President of the Bureau des Longitudes .

Under the influence of François Arago , Fizeau initially turned to astronomical problems. Together with Léon Foucault , Fizeau produced the first image of the sun in 1845, with which he founded astronomical photography . In addition, both investigated the infrared radiation of the sun and the interference phenomena of light. The Fizeau stripes (interference phenomena on wedge-shaped leaves) are evidence of this work . Independently of Christian Doppler (1842), Fizeau predicted in 1848 the Doppler shift of the frequency of light and thus of spectral lines .

Fizeau also worked in the field of thermodynamics , where he constructed an interference dilatometer for measuring the thermal expansion of solid bodies . In 1850 he and Eugène Gounelle (1821–1864) measured the speed at which electricity spreads in conductors. In 1853 he described the installation of a capacitor to increase the efficiency of induction . He then studied the thermal expansion of solids and applied the phenomenon of light interference to measure the expansion of crystals.