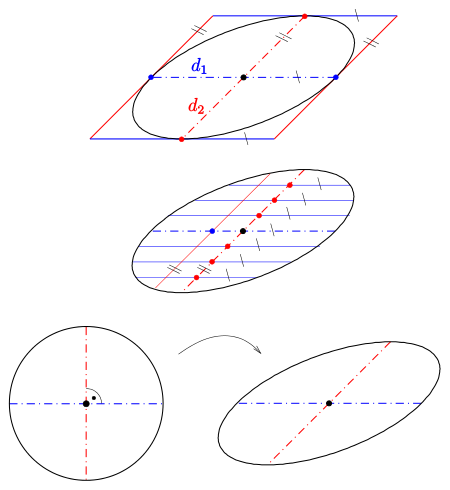 In geometry, conjugate diameters are two diameters of an ellipse that have a special relationship to one another.

Here, diameter means a chord through the center point. If the ellipse is a circle, then two diameters are conjugate if and only if they are orthogonal.

The following equivalent definitions can be found in the literature:

Two diameters of an ellipse are called conjugate if the tangents at the end points of one diameter are parallel to the other diameter.

Two diameters are called conjugate if the midpoints of the parallel chords lie on.

The proof of the properties in KD1 and KD2 results from the fact that any ellipse is an affine image of the unit circle (see Ellipse (Descriptive Geometry) ). Because the two properties are obviously correct for a circle, and an affine mapping maps center points onto center points and maintains parallelism.

The main axes of an ellipse are always conjugate.

Calculation of conjugate points of an ellipse

The tangent to the ellipse at the point has the equation (see ellipse ). A point to be conjugated must lie on the straight line parallel to the tangent through the zero point (center point). So it applies

If , d. H. the ellipse is a circle, two conjugate points belong to two orthogonal radiuses and the last equation has the familiar form (scalar product = 0).

Is the ellipse through the parametric representation

are orthogonal if and only if is, and

is the length of the vector and

Two conjugate directions are thus orthogonal in the sense defined here and the given ellipse is the "unit circle" with regard to the metric defined here.

Remark 1: The hyperbola leads to the symmetrical bilinear form with analogous considerations

Here, too, you can define an orthogonality relation and a metric. The special thing about this case is: There are directions that are orthogonal to themselves, namely the asymptote directions, and there are vectors of length 0 other than (0,0)! This metric is also called the Minkowski metric and the associated "circles" (= hyperbolas) Minkowski circles or pseudo-Euclidean circles . This case plays an essential role in the theory of relativity . On the distance line, the bilinear shape induces a hyperbolic polarity . (Here, hyperbolic means: the polarity has two fixed points.)

Remark 2: If one tries analogous considerations for a parabola, this leads to an "unusable" orthogonality relation. In this case all directions would be orthogonal to the direction of the parabolic axis.