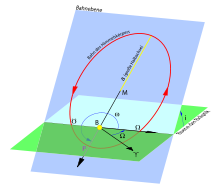 The orbits of the planets and comets around the sun are approximately flat ellipses. This movement is more or less disturbed by other planets. The picture shows an orbit (red) which has a large angle of inclination i compared to the plane of the earth's orbit (ecliptic, green) .

In physics , a trajectory , also a trajectory , a path or a path (sometimes after the English: orbit) is the course of the space curve along which a body or a point, for example the center of gravity of a rigid body , moves. A macroscopic body, such as a bullet or a ball, is also referred to as the trajectory . In a broader sense, the trajectory is a curve in the n-dimensional phase space .

Different trajectories for a crooked throw without any friction (black), with Stokes friction (blue) or with Newton friction (green)

In the case of visible objects, the trajectory can usually be determined using photographic means, e.g. B. with photogrammetry .

The trajectory of an atomic or subatomic particle is only available as an illustrative aid, since these particles must be described by quantum mechanics . Such particle trajectories can approximately be made visible in bubble or cloud chambers or determined indirectly with hodoscopes or wire chambers .