Parabolic trajectory of a thrown or shot object

The parabola is the trajectory that a body describes when thrown in a homogeneous gravitational field if the influence of air resistance is neglected. The inclined throw is the rule - vertical and horizontal throw are exceptional cases. The trajectory parabola is always open downwards; the highest point of the trajectory is the apex of the parabola .

On earth, the gravitational field is approximately homogeneous only at small throw distances. Then the parabolic shape is a good approximation. Strictly speaking, the body follows an elliptical Kepler orbit .

Overview of some formulas for parabolic throwing

The water of a fountain follows the shape of a trajectory parabola.

The reason for the parabolic shape is the fact that only gravity acts on the body during flight . There is a free fall . For the calculation, the initial speed is broken down into the mutually perpendicular components and , which can be treated independently of each other. The horizontal component is completely independent of the vertical component, which is directed upwards. This has the following consequences (be the starting point ):

The location results from this through integration over time:

The body is thrown obliquely upwards at a speed at the angle . Then the following applies to the speed components from which the launch speed is composed by linear superposition (neglecting the air resistance):

This results in the following for the and location components:

The vectorial equation is then:

The explicit path equation in coordinate space (by to dissolve and then in uses) is:

Meaning of the other variables: is the time, is the acceleration due to gravity .

The range is usually defined by the fact that the trajectory parabola reaches the starting height again, i.e. h .: . With this one can solve the equation of motion and get:

Starting angle for the maximum range

Since the sine function has its greatest value at the initial altitude, the greatest range for .

Maximum reach with an initial height

The formula with the arccosine results from the representation for the arccosine, and for the last representation the arguments of the two preceding formulas are divided by one another. The starting height must be so far below the target that this can just be reached with a vertical throw with the throwing distance , so:

The maximum horizontal throw depending on the drop height is for a flight duration of .

The already known formulas result for in each case.

If a target is to be reached at the same height at a given distance with a throw , there are either no, one or two solutions for this task, depending on the initial speed . The first case occurs when the maximum range is less than the distance to the target; the second case, when the target can just be reached with a throw of 45 °. For even higher initial speeds, there are always two angles at which the trajectory parabola leads to the target both times; these are the two positive angles that make up the equation

fulfill. In this case, exactly one solution is always greater than 45 °, the other less than 45 °.

Correspondingly, in ballistics, solutions with an angle of more than 45 ° are referred to as the upper angle group, the others as the lower angle group. In artillery beings is called high-angle fire with a mortar or of a flat fire with a gun or optionally both with a howitzer .

For a throw (or shot) at a target 100 m away at the same height, the initial speed must be at least 31 m / s under the usual ideal assumptions (no friction, acceleration due to gravity of 9.81 m / s 2 ). With this value for the initial speed, it can be achieved with a throw of 45 ° and only by doing this. There are then always two solutions for each higher speed value. For example, with an initial speed of 40 m / s, the target can be reached with an angle of 18.9 ° as well as that of 71.1 °; the flight time is shorter for solutions from the lower angle group, in the example it is about 2.6 s compared to 7.7 s for the second solution.

Reach at an initial height other than zero

The general formula applies to

for the throw . The maximum range and the associated starting angle can be determined from the enveloping trajectory parabola without using derivatives . For is the other way round , for follows .

The apex is reached the moment the vertical speed is zero, i.e. i.e. when an upward movement up to that point ends and a downward movement begins. At the apex the entire kinetic energy (in the vertical direction) was converted into potential energy .

The vertex can be calculated because the litter has a parabolic shape and the vertex lies exactly in the middle between the zeros and . So the vertex has the coordinate . The coordinate is obtained from the equation of motion.

When resolved, the vertex has the following coordinates:

Throw parabola with height and time scale (throw with ≈ 36 m / s below 63 °, impact without atmosphere after 8 s)

If neither gravity nor air resistance were present, the body would continue to fly, following the principle of inertia, uniformly in the same direction and at the same speed as at the beginning (red arrow).

The earth's gravitational field , however, deflects the body downwards - increasing quadratically over time :

The vertical throw upwards corresponds to an undisturbed superposition of straight, uniform movement upwards and free fall downwards. If you represent this in a graphic, you get a symmetrical parabola , the highest point of which corresponds to the turning point (vertex) of the body. The following formulas result:

is calculated by setting the speed , then first the

calculated and finally determined using the equation below.

The vertical throw downward corresponds to a superposition of straight downward movement and free fall downward. The following formulas result:

Another special case for which the equations can be simplified is the horizontal throw. 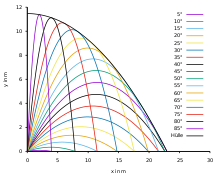 The equation of the envelope of the trajectory parabolas is:

It therefore corresponds to a horizontal throw ( ) from the maximum achievable throw height of the vertical throw with its initial speed .

Throwing distance when throwing on a slope

You can also determine the angle for the maximum range for throws on inclined planes.

The air resistance brakes proportionally . At low speeds and compact missiles, the parabolic shape is retained quite well, as can be seen from the trajectory of an idealized golf ball without lift effects from spin and dimples. At an initial speed of 65 m / s, it flies about 200 meters on an almost symmetrical path. How strong the air resistance acts on a shuttlecock , however, shows the adjacent sketch for 65 m / s. At the end of its trajectory, the ball falls almost vertically to the ground - after just 10 to 15 meters. The maximum flight distance is also not reached at 45 °, but at a take-off angle of 20 °. At lower initial speeds, it increases and approaches the 45 ° parabola.

In missiles with a short burn time (short-range missiles, anti- aircraft missiles), the shape of the trajectory is similar to that of an oblique throw of a sleek body. The range is then determined by the initial speed and crown height, which in turn depends on the angle of fire.

The parabolic flight is a flight maneuver, usually carried out at high altitude, in which an aircraft describes a trajectory parabola lasting about half a minute. It is used to train astronauts in weightlessness and for experiments with reduced gravity, so-called microgravity .