The formerly independent village of Kirchrode was incorporated into Hanover in 1907. Today the district is in the countryside and has the character of a middle-class, upscale district with generous plots and corresponding residential buildings such as villas . Local recreation destinations such as Hermann-Löns-Park and Eilenriede can be reached quickly. In the zoo , walkers can watch fallow deer, red deer, roe deer, wild boar and other small game. The park emerged from a ducal hunting ground. In 1679 Duke Johann Friedrich separated part of the then extensive forest, fenced it in and had fallow deer settle here. Princely hunts took place in the park until the 18th century.

A church was first built on Kleiner Hillen around 1150. The tower of today's Protestant Jakobikirche dates from the 14th century in its current form. The nave was rebuilt from 1782 to 1794. In 1964 the Catholic Church of the Holy Angels was built, and in 2011 the old Catholic Church of St. Maria Angelica.

Between 1924 and 1929, a district in the garden city style was built in the area of ​​Bünteweg and Lange-Hop-Straße . In 1953, the Westfalenhof on Bünteweg was acquired for the University of Veterinary Medicine Hanover , which has its headquarters here to this day.

There are shops in the center of the village at the intersection of Tiergartenstrasse, Großer Hillen and Brabeckstrasse. Here is the sculpture Klönschnack created in 1984 by the Allgäu artist Fidelis Bentele .

The district is considered an “upscale” residential area.

With around 18,800 inhabitants, the district is one of the most populous districts of Hanover . In addition to the actual old village of Bemerode , the settlement area on the Kronsberg , which was developed as part of the Expo 2000 world exhibition, is part of the district. Almost half of the district's residents live here today.

Bemerode has been connected to the Hanover city ​​rail network since 1999 . The D-South route built for the Expo initially runs along Bemeroder Strasse and has five stations equipped with elevated platforms. In the course of Lubowitzweg, it crosses under Brabeckstraße in the tunnel. This is followed by the Brabeckstraße subway station (until 2009: Bemerode / Mitte ). The station, which is open to the top, is, besides the Mühlenberger Markt underground station, the only underground station outside the city center and the districts adjacent to the city center. In the further course, the Kronsberg district will be developed with four elevated platform stops. On the D-South route, tram line 6 (Nordhafen – Messe / Ost) runs, and for trade fairs and larger events there is also line 16 (Königsworther Platz – Messe / Ost).

The Südschnellweg runs past the district in the north and the Messeschnellweg in the west . 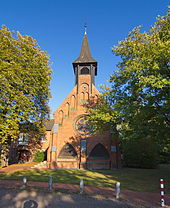 Bemerode was first mentioned by name in 1204. In 1735 a large " army show " of the Braunschweig-Lüneburg army took place here, the review at Bemerode . On March 1, 1974, Bemerode was incorporated into Hanover together with the neighboring villages of Anderten and Wülferode as part of the Lower Saxony municipal reform.

The neo-Gothic brick chapel of St. Johannis from 1867 is located in the old village center on Wülfeler Straße . The von Graevemeyer family estate and the Bemerode II manor of the Mörlins family are also located here .

The Bemeroder Rathausplatz is the center of the old part of town. One of eight Hanover town hall offices is housed in the former Bemeroder town hall. The district council meets here every one to two months. The St. John's Church , built in 1962, and the Am Sandberge elementary school are nearby . Single-family houses characterize the northern part of the city, while three-story apartment buildings were mainly built towards the center. 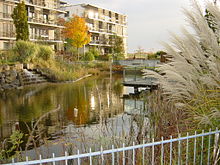 Inner courtyard in the district 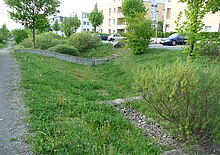 On the western slope of Kronsberg end of the 1990s was related to the EXPO 2000 , the ecological point erected Expo settlement on Kronsberg . The district is often perceived as a separate district due to its independent development history and special structure. At the World City Summit 2012 in Singapore , the residential area was recognized as one of the hundred most innovative infrastructure projects in the world.

The residential area consists of around 3000 residential units in two to four-story construction. There is an extensive range of infrastructure with schools, kindergartens, shops, the Krokus district center and the Kronsberg Evangelical Church Center . A space-saving construction method, high building density, clear building edges and compact structures created an urban character with diverse architecture. For the first time in Germany, a housing estate with a size of over 70 hectares was built using a low-energy house design. The heating energy consumption per household is around 40% and the CO 2 emissions almost 75% lower than with conventionally constructed buildings. At the same time, 32 terraced houses with passive house standards were built. In the north of the existing settlement is still being built; Around 100 urban plots are made available for further passive houses (single-family, semi-detached and terraced houses).

As of January 2013, 7,150 people lived in the district in 2,600 rental apartments, 150 condominiums and around 400 row houses, semi-detached houses and single-family houses.

In the district, rainwater is almost completely seeped away despite the problematic marl soil . This is also achieved by minimizing sealed areas and green roofs . In the public streets, rainwater is completely infiltrated through trenches and gravel beds on the sides, which create an eleven-kilometer-long trough-trench system.

Over 1000 street trees shape the streetscape. There are two district parks: Oheriedenpark in the north and Kattenbrookpark in the south. In addition, around 650 street trees were planted in the adjoining landscape and former arable land was reforested. Numerous hiking and biking trails were created.

In the 2000s, the housing market in Hanover was considered relaxed. That is why there were only a small number of smaller additions to the Kronsberg. In the 2010s there was again a housing shortage and a sharp rise in rents, so that numerous new building areas were planned in the city, the largest of them on the southern Kronsberg.

There, at the end of the 2010s, the Kronsberg-Süd residential area will be built not far south of the existing residential area, in which around 3,500 rather larger residential units for up to 9,000 people are to be built from 2019. Another large shopping center and another elementary school are also planned. The construction planning process has been running since 2016. If the plans are implemented, the number of inhabitants on Kronsberg will at least double by the beginning of the 2020s.

The construction of a larger number of new apartments to the north of the existing residential area is also being considered, but to a lesser extent (around 1000 apartments) and largely adjacent and embedded in the partially existing infrastructure. The planning for this expansion was not yet completed in 2016.

Wülferode seen from the air

Wülferode is located on the eastern slope of the Kronsberg . The boundaries to the neighboring districts of Bemerode in the west and Anderten in the north run exclusively in the Feldmark, so that there is no direct transition in the development to these districts. The village structure has been preserved.

The site's listed chapel was built in 1756 as a half-timbered building. Your bell dates from 1644 and was created by the Hanoverian bell founder Ludolf Siegfriedt . The place has a bus connection to the stop Kronsberg of the tram line 6 , but no shop for local supply. Leisure opportunities exist in a youth club, a playground, at the TSV Wülferode sports club, the Wülferode volunteer fire department and the Wülferode community. In an inn, guests will find the shortest bar in Hanover. Recreational areas are the Gaim and Bockmerholz forest areas . The A 7 runs through the Gaim with the Hannover-Wülferode motorway service station located there . On March 1, 1974, Wülferode was incorporated into Hanover as part of the Lower Saxony municipal reform.

In the local elections in September 2016 , the CDU was again the strongest party in the district with 37.8% of the vote. The SPD became the second strongest party with 29.4%, the Greens became the third strongest party with 13.9%. It is followed by the FDP with 12.1% and the LINKE with 5.9%. The SPD, the Greens and the Left Party's candidate formed an alliance that was dissolved again in 2017. Bernd Rödel (SPD) was elected district mayor in 2016 and has held the office since 2011. Regine Kramarek (Greens), Mayor of Hanover, was elected as his deputy. The Kirchrode-Bemerode-Wülferode district council meets about eight times a year in public, mostly in the Bemerode town hall, and sometimes also in the IGS Kronsberg or in the KroKus district center. Since 2001, the district council has awarded the district of Kirchrode-Bemerode-Wülferode the plaque of honor to deserving citizens of the district. The award ceremony takes place annually at the traditional reception of the district council.