Victoria (historically also Port Victoria ) is the capital of the Seychelles . Located on the northeast coast of the island of Mahé , it is the largest settlement and the only city in the island republic with around 26,500 inhabitants (as of 2010) . The current name refers to the British Queen Victoria after the settlement was first christened L'Etablissement du Roy by its founder.

The area of ​​today's Victoria was settled by French colonialists under the leadership of Charles Routier de Romainville as early as 1778 . The Bicentennial Memorial in downtown Victoria is a reminder of this. Until 1841 the settlement was called L'Etablissement du Roy, then the British renamed it Victoria after the Queen at the time 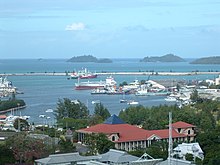 The port of Victoria 's major exports are spiced vanilla , coconuts , coconut oil , soaps and guano . The international airport , which was completed in 1971, also belongs to the urban area . The construction of a monorail in and around Victoria is planned (as of 2012). 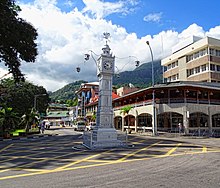 One of the tourist highlights in Victoria is the clock tower , which was built based on Little Ben in London's Victoria Street. The Courthouse, Botanical Gardens, and Victoria National Museum of History, as well as the Victoria Natural History Museum and Selwyn-Selwyn-Clarke Market Square are other attractions.