This article covers the capital of Jilin Province in the northeast of the People's Republic of China. For further meanings, see Changchun (disambiguation) . 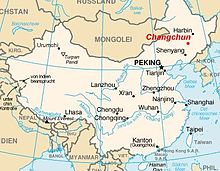 Location of Changchun in China

Changchun ( Chinese  長春 市  /  长春 市 , Pinyin Chángchūn Shì  - "long spring") is the capital of Jilin Province in the northeast of the People's Republic of China and one of the country's 15 sub-provincial cities . It has around 3.4 million inhabitants in the city center (as of January 1, 2010) and around 7.7 million in the entire city area.

The annual average temperature is 4.9 ° C, the total annual precipitation 616 mm. The climate is continental with cold and relatively dry winters and warm and humid summers.

At the county level, Changchun consists of seven municipalities , one county and two independent cities . These are:

The population figures refer to the end of 2004 and assume 7.26 million inhabitants for the whole of Changchun.

The 2000 census counted 7,135,439 inhabitants for the entire administrative area of ​​Changchuns.

In 2017, just under 4.2 million people lived in the actual urban settlement area of ​​the city. The rest of the population lives in the rural area. Due to the ongoing urbanization, 5.5 million inhabitants are expected in the agglomeration by 2035.

Changchun is one of the most important industrial cities in northern China. The city is home to steel mills and a large number of metal processing plants. The number 1 vehicle plant ( China FAW Group ) was once the largest manufacturer of cars in China and has been operating two large joint ventures in the city together with Volkswagen / Audi and Toyota since 1991 . In 2004, vehicle plant number 2 was inaugurated. 660,000 VW vehicles are produced annually and 9,000 people are employed in the vehicle factories. A further expansion into the largest Chinese car city is planned. Since 1999, Changchun also has its own international auto show. The China Changchun International Automobile Fair 2009 was the largest event to date with 130 domestic and foreign exhibitors. But the automobile manufacturer Zxauto also operates its second plant here.

Other economic factors are

According to a study from 2014, Changchun has a gross domestic product of 124.46 billion US dollars in purchasing power parity . In the ranking of the economically strongest metropolitan regions in the world, it took 108th place. The GDP per capita is $ 16,413 (PEC). The GDP per capita grew by an average of 12.4% annually from 2000 to 2014.

A notable attraction is the Imperial Palace , in which the Emperor of Manchukuo , Puyi , who was appointed by the Japanese , resided.

The International Animation, Comics & Games Museum, founded by Rolf Giesen , has been in Changchun since 2010 .

Changchun is home to Jilin University (JLU), Northeast Normal University and Changchun University of Science and Technology . The Jilin Huaqiao Foreign Language Institute is also located here . The Institute for the History of Ancient Civilizations , which was founded in 1984 as the first ancient university institute in China, publishes the Journal of Ancient Civilizations and employs up to four foreign researchers as visiting professors every year, is located at the Northeast Normal University . Rainer Hannig , Bernhard Kytzler , Fritz-Heiner Mutschler , Carl Joachim Classen , David A. Warburton , Maria Rybakova , Burkhard Fehr and Sven Günther have already worked in the city. The mathematician Tassilo Küpper was honorary professor at Jilin University in 1988.

In 2007 the Asian Winter Games were held in Changchun.

In the 18th century , Changchun was a small trading city. It was not until 1906 that the city gained greater importance when the Japanese South Manchurian Railway and the Russian Chinese Eastern Railway met here.

After Japan in 1931 in the Manchurian crisis , the Manchuria occupied and the satellite state of Manchukuo cried out, the town was 1932, the capital of the state. The name was changed to Xinjing ( 新 京 , Xīnjīng , Japanese Shinkyō , obsolete after Post Hsinking ), in German " New Capital ". The city experienced enormous growth and large avenues and government facilities were built. In addition, the first Japanese high-speed line of the Ajia from Changchun to Dalian was built here.

In 1945 the city was occupied by the Soviet Red Army in Operation August Storm . The troops sacked the city. The Soviet Union maintained a presence in the city until 1956 and built the first automobile production facility. The on a Ford -based model Jiefang - Truck (German "liberation") and the Red Flags saloons were produced here until 1987th

During the Chinese Civil War , the city was occupied by the Kuomintang in 1946 . From March to October 1948, the city was besieged by CCP troops and then captured. Up to a million people died, many of them starving. In the official Chinese historiography, the "victory" of Changchun was considered to be one of the most peaceful and "bloodless" chapters of the glorious liberation struggle of the people; casualty figures were not mentioned.

In 1954, Changchun became the capital of Jilin Province. In May 1992, Li Hongzhi first published his teachings on Falun Gong here .

In January 2006, the German city planner Albert Speer junior was awarded the contract to plan and build an automobile production facility which, at 120 km², is twice the size of Shanghai's Autocity Anting . The settlement of 300,000 employees was included in the project, most of the construction work has already been completed (as of 2017). The end of the project is planned for 2022. According to the city government's plans, Changchun is to become a Detroit of the East . It is already China's second largest automotive location.

China is in one of the largest transformation processes in its history, and by 2025 another 350 million people will be relocating from the countryside to the cities. Changchun is also expected to double its population in the next 10 to 15 years. The planning office Albert Speer and Partner, Frankfurt a. M., won the competition for an ecological expansion of Changchun. The new parts of the city that will emerge from 2008 are to be given the function of a “car city”, i.e. H. All areas are subordinated to the close interlinking of work in the development and production area, living close to the workplace and regenerative leisure activities. According to the will of the Chinese government, Changchun will become the main focus of the fast growing domestic automotive industry. To what extent the concept of a predominantly eco-city like the one in Shanghai Dongtan is being pursued, will be shown by the detailed planning that is still outstanding.

The master plan provides for one of the typical square city grids, which is about 10 km wide and 12 km long and is intended to accommodate 300,000 residents. The model city is characterized by an avenue-like double axis, interrupted twice by artificially guided rivers, which are supposed to ensure good ventilation with wide accompanying areas. All centrally usable buildings and many of the emission-free workplaces are planned in the center, the residential areas are to the right and left of the main axis at a reasonable distance; this city should also help the bicycle to flourish again. The design of the peripheral areas of the planned city will probably also be combined with ecological landscape repairs, i. H. with publicly usable, park-like areas or smaller forest areas instead of areas that are used intensively for agriculture but are closed to the public.

Changchun has partnered with the Canadian Quebec and Greenland capital Nuuk . The following 18 city ​​partnerships are also listed: