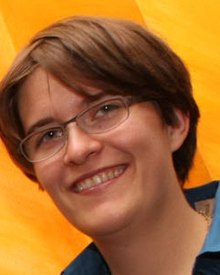 Anna Lührmann (* 14. June 1983 in Lich ) from 2002 to 2009 Member of the German Bundestag (Group Alliance 90 / The Greens ) and also youngest ever elected to the Bundestag deputies . She is currently working as a postdoctoral researcher at the University of Gothenburg .

Anna Lührmann spent an exchange year with Youth For Understanding in Syracuse (New York) , USA , from 1999 to 2000 . After graduating from the Main-Taunus-Schule in Hofheim am Taunus in 2002 , Lührmann began studying social science at the Humboldt University in Berlin . From 2003 to 2008 she studied at the Fernuniversität in Hagen and obtained a bachelor's degree in "Politics and Organization". She completed her master's degree from 2009 to 2011 at Ahfad University for Women in Sudan in the subject " Gender and Peace Studies ". In addition, she trained Sudanese MPs, including a. on democratic instruments for the separation and control of powers .

In 2011 she returned to the Humboldt University of Berlin and received her doctorate in 2015 from the Berlin Graduate School of Social Sciences on the subject of UN Electoral Assistance: Enhancing Democratization or Legitimizing Authoritarian Rule? . She is the author of the 2013 United Nations Development Program Enhancing Youth Political Participation Throughout the Electoral Cycle - A Good Practice Guide . In January 2015 she published an article on Elections and Peace in Africa: Perspectives for 2015 . Since August 2015 she has been working as a post-doctoral researcher at the V-Dem Institute at the University of Gothenburg.

From 2002 to 2009 she was a member of the German Bundestag . Since September 2004 she has been a member of the Budget Committee . Anna Lührmann has always entered the Bundestag via the Hesse state list. Since June 2007 she has been the sponsor of the Federal President Theodor Heuss School Homberg in the project School without Racism - School with Courage . In 2009 Lührmann did not run for the German Bundestag again.

Lührmann is married to the diplomat and former German ambassador to Sudan, Rainer Eberle . The couple have a daughter together.