The title of this article is ambiguous. Further meanings are listed under Ulmet (disambiguation) . 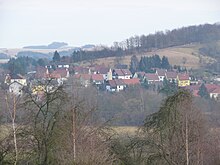 Ulmet is a municipality in the Kusel district in Rhineland-Palatinate . It belongs to the community of Kusel-Altenglan . The name Ulmet probably goes back to the Latin . ulmetum = elm forest .

The 460-meter-high Steinerne Mann stretches out to the far west on the border with Oberalben . Further to the northeast is the 403 meter high waiting head , alternatively called the Brückenberg .

Ulmet is located on the Glan . On site it takes the Pelschbach from the right and the Felschbach from the left . Just a short distance before it flows into the Glan, the Steinalp is within the municipal marker .

Ulmet as a Celtic foundation bears a place name of corresponding origin, like the names of Kusel (Cosla) and Altenglan (Gleni). This is in continuity with the river name Glan, which is also of Celtic origin.

The district of Pielsbach on the right side of the Glans was an independent place until the 14th century. It stretches along the stream of the same name that flows into the Glan and, according to the oldest traditions, was called Pelsbach / Pilsbach (1364), Pelesbach (1381), Pilßbach (1433), Pielsbach (1585). The stream of the same name appears in the years 1585–1588 also as Pielsbach. Dagger and Greule lead this name back to a pre-Germanic water name Pelisa , to which the basic word -bach was added in Germanic-German times.

In the winter of 1783/84 the Glan flooded the area. Ulmet belonged to the Duchy of Pfalz-Zweibrücken until the French Revolution .

From 1798 to 1814, when the Palatinate was part of the French Republic (until 1804) and then part of the Napoleonic Empire , the place was incorporated into the Canton of Kusel and the Arrondissement de Birkenfeld and was the seat of a Mairie . In 1815 Ulmet initially belonged to Austria . After the Congress of Vienna , it was added to Bavaria a year later . From 1818 to 1862 the community continued to belong to the Kusel canton and was part of the Kusel Land Commissioner , which was then converted into a district office.

In 1939 the place was incorporated into the Kusel district. After the Second World War , Ulmet became part of the then newly formed state of Rhineland-Palatinate within the French occupation zone . In the course of the first administrative reform in Rhineland-Palatinate , Ulmet was incorporated into the newly formed community of Altenglan . The place has belonged to the Kusel-Altenglan community since 2018 .

The local council in Ulmet consists of twelve council members, who were elected by a majority vote in the local elections on May 26, 2019 , and the honorary local mayor as chairman.

There are a total of five objects on site that are listed . Below is the parish church, which has been called the “hallway chapel” for centuries; it dates from 1091. The Kappeler Bridge was first mentioned in 1542. The new building from 1748 fell victim to the floods in 1784 . The bridge has been in existence since the subsequent reconstruction.

There are four natural monuments in the municipality . In addition, the Steinalb estuary and waiting head nature reserves extend partly over the Ulmet district.

There is a kindergarten and a primary school in Ulmet .

The federal highway 420 brushes the western edge of the settlement. The county road 22 connects with Ulmet Kusel. The district road 25 connects the town center in both directions with the federal road. In the southwest is the A 62 . Ulmet is connected to the local transport network via bus routes 270 and 271, which connect the community with Kusel and Lauterecken.

Cities and municipalities in the Kusel district