Hilgesdorf is a district of the municipality Flechtingen in the district of Börde in the German state of Saxony-Anhalt . 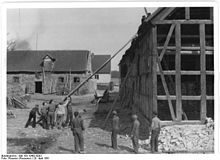 Demolition of a half-timbered house in Hilgesdorf in 1951

The small place was the Vorwerk of the von Schenk'schen Rittergut Flechtingen and already existed at the beginning of the 17th century. During the Thirty Years War it suffered from the imperial troops of Wallenstein . After the end of the war there were no more cattle on the farm, the fields had been desolate for years. Between 1806 and 1813 the place was under the rule of the Napoleonic Kingdom of Westphalia under Jérôme Bonaparte and was assigned to the canton of Calvörde . Hilgesdorf was an administratively independent manor district , which in 1910 had 49 inhabitants. On September 30, 1928, the manor district was united with the rural community Flechtingen and thus became a district. After the Second World War, after a brief American interlude, the small town came under the Soviet occupation zone on July 1, 1945 . After the expropriated land was initially given to new farmers, an agricultural production cooperative (LPG) operated in Hilgesdorf from 1952 . However, it was economically weak and achieved z. B. 1957 no income. That is why it later merged with LPG Flechtingen. The forest administration of the Flechtinger Forest has been based in Hilgesdorf since the time before the Second World War.