Süplingen is a district of the town of Haldensleben in the Börde district in Saxony-Anhalt .

The Süplingen is about five kilometers west of the city center of Haldensleben in the Flechtinger ridge . The Bodendorf district also belongs to Süplingen .

During the Second World War , the Magdeburg Gestapo control center set up a so-called work education camp in the quarry for 100 prisoners who had to do forced labor under the toughest conditions in the Frömling & Frasch quarry , but also in external detachments in the Irxleben sawmill and in agriculture . At least 20 people were killed.

On July 1, 1950, the previously independent municipality of Bodendorf was incorporated.

18% of the residents of Süplingen are Protestant, 3% Catholic. The Lutheran St. Anne's Church in Süplingen belongs to the Bülstringen parish in the Haldensleben-Wolmirstedt parish of the Evangelical Church in Central Germany . The few Catholics are assigned to the parish of St. Christophorus , based in Haldensleben, diocese of Magdeburg , whose nearest church is St. Liborius (Haldensleben) .

Since the last local election on June 7, 2009, the last local council had 12 members. The turnout was 42.5%. The choice brought the following result:

Another member of the municipal council and its chairman was the mayor.

The coat of arms was approved on May 13, 1996 by the Magdeburg Regional Council.

Blazon : “Divided by Göpelschnitt; Field 1: in silver a green linden leaf; Field 2: a black hammer and an iron crossed in silver, covered with a chisel; Field 3: a silver ploughshare in green. "

Until then, Süplingen had no legitimate coat of arms or image seal. The municipality decided to include the following elements in the new coat of arms:

1.) A linden leaf, which shows the relation to the surrounding nature as a branch of the Flechtinger mountain range,

2.) the tool of the cutter, which symbolizes the stone quarrying that was carried out on site for a long time with hammer, iron and chisel,

3.) a ploughshare, which underlines the centuries of agriculture as the main economic branch of the population.

The depiction of the coat of arms elements took place in a shield divided by Göpelschnitt.

The coat of arms was designed by the Magdeburg municipal heraldist Jörg Mantzsch .

Süplingen is known for its old quarry remains . Rock was and is extracted in these quarries. 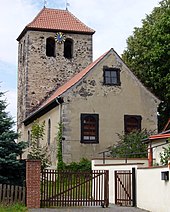 Numerous barrows from the Neolithic Age are located 3–4 km south of Süplingen. The two large megalithic tombs “Küchentannen” and “Kaisergrab” are freely accessible, the “King's Grave” is located on the premises of the natural stone works Dönstedt.

Various quarries are out of order today and overflowed with water. These quarries ("Canyon" and "Steinbruch") offer the best swimming opportunities.

These excellent opportunities have also been discovered by divers and a popular diving area has emerged. In addition to the large underwater flora and fauna, there are many remains from the time of the open-cast mining.

In 2002 a new multi-purpose hall was opened in the town center. Sports such as football, volleyball, table tennis, gymnastics, etc. are carried out on the size of a handball field by soupers and residents of the surrounding communities. Competitions are held at recurring intervals, such as B. in roller skating.

On the southern edge of the village is the extensive sports field with soccer field, club house with sauna, roofed spectator terrace, training and football field for children and two beach volleyball fields. On September 16, 2012, a fire destroyed the club house.

Furthermore, the place has a bowling alley with four lanes.

The sports club was founded in 1926 and is accordingly called SV Grün-Weiß 1926 Süplingen eV During the GDR era it was called the company sports community (BSG) Aufbau Süplingen.

Since 1970, during the carnival season at the end of January / beginning of February, several ceremonial meetings (program events) of the Süplinger Narrenbund have taken place in the large hall of the inn.

Süplingen is on the Haldensleben – Weferlingen railway line , but since 1999 only freight trains have been running on it. The next passenger station is Haldensleben on the Oebisfelde – Magdeburg railway line , five kilometers east of Süplingen. The bus line 618 of the BördeBus Verkehrsgesellschaft goes there almost every hour , but for the most part as dial-a-ride buses that can be booked in advance .

In Haldensleben there is also the next connection to the federal trunk road network with the B 71 and the B 245 .