Hörsingen is a district of the city of Oebisfelde-Weferlingen in the Börde district in Saxony-Anhalt .

The following were identified as living spaces in the municipality:

Hörsingen, originally Horsigge , was first mentioned in 1112. In 1261 there was a mention of another audition in the area ( in utroque Horsigge ), which must have fallen wildly.

The honorary mayor Peter Schorlemmer was in office from May 6, 2001 to December 31, 2009 and has been the local mayor since then.

According to the last local election on June 7, 2009, the council had ten members. Due to the founding of the city of Oebisfelde-Weferlingen, the local council automatically became a local council. The turnout was 43.6%. The choice brought the following result:

In 2014 a local council with sesch members was elected, one seat remained vacant. The local mayor is also a member of the local council as chairman.

The Protestant St. Stephen's Church in Hörsingen has a Romanesque architecture, it was originally attached to a neighboring monastery. Its bell from the 12th century is one of the oldest preserved church bells in Germany. In 1683 the nave was extended to the east in a baroque style and the baptismal angel and altar were created. In 2006 the wall around the rectory was rebuilt with the old stones and the church area was redesigned.

The Evangelical Lutheran Church (see also "Arts and Culture") is part of the parish area Buelstringen, in the Central Region of the church district Haldensleben Wolmirstedt-the Evangelical Church in Central Germany . 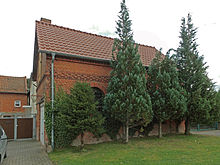 Since, as a result of the Second World War, with the influx of expellees from the eastern regions of the German Reich , Catholics had resettled in the Protestant Hörsingen since the Reformation , and in 1967 a former forge was converted into a chapel . In 1968 it was inaugurated as the "Emmaus Chapel" and a wall hanging showed the Emmaus disciples . In 1992 the chapel was given up because the number of Catholics had decreased again. Today the church " St. Joseph and St. Theresa of the Child Jesus " in Weferlingen, about eight kilometers away, is the closest Catholic place of worship. The former Emmaus chapel is used profanely today.

It is around nine kilometers to the south to Bundesstrasse 1 , which connects Braunschweig with Berlin . The federal motorway 2 (junction Alleringersleben ) is reached after twelve kilometers. Hörsingen is located on the Haldensleben – Weferlingen railway line, which is used exclusively for freight traffic .