Eschenrode is a district of the city of Oebisfelde-Weferlingen in the Börde district in Saxony-Anhalt .

The village was first mentioned in a document as Haskenroth in a confirmation document from Pope Hadrian IV for the Mariental monastery in 1158.

There is evidence that around 1500 BC there were First human life in the place, this is proven by the discovery of a stone box grave in 2002 during sewage works.

The Eschenröder Church is one of the 35 parish churches founded by Hildegrim von Chalons († 827), the first bishop of the Halberstadt diocese . The next centuries will be shaped by belonging to this diocese . The Eschenröder Church became the Archidiakonantskirche when the Halberstadt bishops created church districts directly subordinate to the bishop in addition to the aristocratic own churches . The church district Eschenrode comprised 22 churches from Bartensleben to Grafhorst . In 1170 the place was mentioned by Halberstadt Bishop Gero von Schowitz / Schenke as Esekenrode , confirmed as the property of the monastery and mentioned that Notung von Gatersleben left this place as a gift. In 1224 the place was mentioned as Esekenroth , when Bishop Friedrich II of Kirchberg transferred the archdeaconate Eschenrode and Bardorf to the newly appointed Provosty Walbeck .

In 1311 the village is mentioned as Esekenrode in the Halberstadt feudal register and as a co-occupation by Ludolf von Warberg . In 1380 Heinrich von Esekenrode is mentioned in a Walbeck or Weferlinger certificate and proves the existence of a family named after the place. The non-profit religiosity in the places and by the 1485 mentioned in a document Kalanderbruderschaft occupied. The Kaland met not only for communal prayers, above all to do charitable works to diseases and the poor.

In 1564 the first visitation took place in Eschenrode as a tool to carry out the Reformation , this was done on the instructions of Bishop Sigismund von Brandenburg . Visitations followed in 1589, 1663, 1670, 1689, 1722 and others from 1727. The first school in the village was founded around this time. She owned a classroom, a small room and a pantry. 49 children were taught for 9 groschen per child. 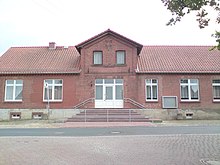 The number of residential buildings (54) has changed only insignificantly since 1842.

1 Population from 1985 to 1990 and 1995 to 2009 as of December 31st.
(Sources: Statistisches Landesamt Sachsen-Anhalt, www.Gemeindeververzeichnis.de, Michael Rademacher: German administrative history from the unification of the empire in 1871 to the reunification in 1990. gardelegen.html. Accessed September 2018 (Online material for the dissertation, Osnabrück 2006).  Law on district reform [im Land Saxony-Anhalt from July 1, 1994])

The honorary mayor Jürgen Böttcher was in office from 1990 to 2009 and has been the local mayor since then.

According to the last local election on June 7, 2009, the council had eight members. Due to the founding of the city of Oebisfelde-Weferlingen, the local council automatically became a local council. The turnout was 54.6%. The choice brought the following result:

Old coat of arms from the beginning of the 20th century

Seal of Eschenrode at the end of the 20th century

Blazon : “In silver on the raised central peak of a green Dreiberg, a red church with a pointed and crossed tower, three window openings in the nave and an open door and two window openings in the tower; between two green mountain ash trees with red berries growing out of the outer peaks of the Dreiberg and disappearing into the outer edge; the Dreiberg is covered with a silver bell. "

Referring to the place name, the community had a coat of arms before, but this was not approved. There is also an image seal of the community. Both templates show a natural tree with no generic feature, which is probably supposed to be an ash tree.

1. The Halgenberg. This mountain is represented by the three mountain in the shield.

2. The chapel on the Halgenberg

3. The bell that, according to legend, was found by shepherds

4. Two into the picture towering mountain ash on the basis of the name

The coat of arms was designed by the municipal heraldist Jörg Mantzsch and included in the approval process. The colors of the parish are: green - silver (white).

A partnership connects the place with Essenrode in Lower Saxony , a district of Lehr .

The Eschenrode Church is dedicated to Saint Stephen . It has a late baroque interior with high arched windows. It contains a rare Bode organ, a baptismal angel and, according to the Nievoldhagen legend , a bronze bell found in the forest . Nievoldhagen was a nearby settlement, of which you can still see the foundation walls of the former church. The inscription on the bell shows that it was cast by clawes backmester van magdeborch in 1511 . There are also two steel bells in the church tower , which were purchased for two bronze bells confiscated for weapons production during the First World War .

In the years 1568-1616 the original form of today's church was built. Due to the lack of space due to more residents, a gallery ( Prieche ) was built with the inscription: The wood for this Prieche was given by Michael Müller, master shepherd . Around 1600 the Nievoldhagen bell is hung in the tower. In 1720 the church burned down except for the tower and was rebuilt as it still exists today.

Legend of the bell of Niewoldthagen

Three shepherds, one from Behnsdorf , one from Hödingen and one from Eschenrode, looked after the pigs in the small oaks , as the acorn fattening was good and the fields and pastures were grazed. Suddenly they saw something flashing in the hollow that the pigs had dug up. Upon closer inspection, they recognized this shimmering something as a bell. They knew that this could only have come from the desert town of Niewoldthagen. The question now arose what should be done with her. All three shepherds had found them, none of them had a privilege. They decided to run to their hometowns and get a vehicle to take the bell away. The first person to arrive at the site with a team should be able to bring the bell to his home village. The bell now reached Eschenrode, because the Eschenrode shepherd met a team on the way that immediately drove back with him to recover the bell. Now the fifteen hundredweight bronze bell from 1511 hangs in the church tower in Eschenröder and always shouts: "Never - wold, never - wold ..."

As a result of the Second World War due to the influx of expellees from the eastern territories of the German Reich Catholics in since the re- reformation had settled Protestant Eschenrode, a former blacksmith became a chapel rebuilt. It also served as a pilgrimage chapel for the Schoenstatt Movement . The picture on the back wall of the sanctuary was a copy of the miraculous image of the refuge of sinners as it is in every Schoenstatt chapel . In 1992 the chapel was given up because the number of Catholics had decreased again. Today the church " St. Joseph and St. Theresa of the Child Jesus " in Weferlingen, about six kilometers away, is the closest Catholic church. The former chapel is now used as a storage room.

To the federal highway 1 , which connects Braunschweig with Berlin , it is about eleven kilometers in a south direction. The Bundesautobahn 2 junction Alleringersleben (64) is reached after 14 kilometers. The national road 42 , linking Haldensleben and Weferlingen , goes through the town.