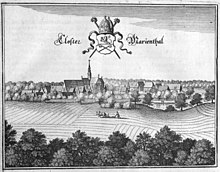 The former Mariental monastery in the municipality of Mariental , as well as Marienberg monastery near Helmstedt , was founded in 1138 by Count Palatine Friedrich II of Sommerschenburg as a Cistercian monastery and belongs to the Altenberg filiation .

Initially, Abbot Bodo from the Amelungsborn monastery lived there together with twelve monks from Altenberg near Cologne. In 1179 the von Sommerschenburg family ended, and most of the monastery and its possessions fell into the hands of Henry the Lion .

After an economic boom (monastery lands extended to Magdeburg, Jüterbog and Braunschweig), the decline began at the end of the 14th century. The Cistercian monastery history ends in 1569. After the Reformation , the monastery housed a Protestant monastery school and a teachers' college from 1542 to 1745, which was moved to Helmstedt in 1773 . The owner was the Braunschweig United Monastery and Study Fund, founded in 1569 .

The monastery church is a three-aisled pillar basilica with a transept and a straight choir closure. It shows Romanesque and Gothic styles. The eight-axle nave and the transept are flat-roofed. The square side chapels of the choir were demolished, as were the side chapels that were later added on the southern arm of the transept. The two east bays of the north aisle are separated from the central nave and the transept by walls. The south aisle is one step lower than the central nave. The choir has a ribbed vault .

The enclosure is south of the church. The cloister was demolished in 1840. The east wing with the square, nine-bay chapter house, the chapel and a square hall with a central support as well as the dormitory, which was divided into individual cells in the late Middle Ages, and the west wing with the seven-bay lay refectory on the upper floor have been preserved. The connecting passage to the south aisle of the church was widened to the west in the 14th century and forms the access to the groin-vaulted chapel of the von Alvensleben family.

Today the complex with the associated agricultural domain is owned by the Braunschweigischer Kulturbesitz Foundation ; the monastery church belongs to the Protestant parish of Mariental .

The organ on the west gallery with a historicizing free pipe prospect was built in 1890 by the organ building company P. Furtwängler & Hammer . The fundamentally arranged cone chest instrument has 18 stops on two manuals and pedal. The actions are mechanical. After several modifications, the instrument was fundamentally restored in 2002 by OBM Christoph Grefe, Ilsede.