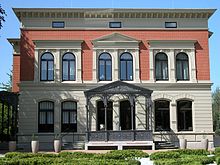 The foundation's assets amount to over 275 million euros and largely consist of real estate and financial deposits. The properties include u. a. Cultural assets such as the imperial cathedral in Königslutter , a large number of monasteries and churches, more than 20 foundations and monasteries with around 7,500 hectares of arable land and 5,500 hectares of forest areas and more than 3,000 heritable building rights . Projects are funded from the annual income of around two million euros.

The city of Braunschweig is planning to transfer part of the urban real estate and property portfolio in Riddagshausen to the SBK. These include a. the monastery church , the Grüner Jäger restaurant and the former Reichsjägerhof "Hermann Göring" . The SBK will lease part of this land to the Evangelical Foundation Neuerkerode .

In June 2017, the Lower Saxony State Audit Office criticized in its annual report "inappropriately high expenditures" by the Foundation, its President and its Director for their representation and entertainment expenses, business trips to other European countries and inappropriately large company cars. The administrative expenses rose within ten years from 150,000 € annually to 930,000 €.