Braunschweigisches Landesmuseum in the Vieweg House

The Braunschweigisches Landesmuseum ( BLM ) is a historical museum in the city of Braunschweig and the only history museum sponsored by the state of Lower Saxony . The State Museum has four locations: The Vieweg house on Burgplatz and Hinter Gegidien in Braunschweig, the Wolfenbüttel law firm and the Bortfeld farmhouse museum .

History of the museum

The BLM was founded on October 11, 1891 as the municipal patriotic museum for Braunschweigische Landesgeschichte ; the museum building was then on Hagenscharrn Street . The basis was an extensive collection of exhibits that were brought together in 1890 on the occasion of a commemorative exhibition of the "Black Duke", Friedrich Wilhelm von Braunschweig-Lüneburg .

In 1902 the museum moved into new premises in the Aegidienkirche and in the adjoining rooms of the former Benedictine monastery and the Pauline choir . The first full-time director was the art historian Karl Steinacker (1872–1944) from 1910 to 1935 .

During the Nazi era , the museum was nationalized on October 1, 1935 and renamed the Braunschweigisches Landesmuseum für Geschichte und Volkstum in 1938, a name that it carried until the end of 1982. The museum director was the art historian Johannes Dürkop (1905–1945), a staunch National Socialist.

Relocation to the Vieweg house

After the end of the Second World War , the museum had to hand over the premises of the Aegidienkirche to the parish of St. Nicolai, as the parish urgently needed new parish rooms due to the great war damage and the soaring number of Catholics in the city as a result of the refugee movements. The war-related repair work on the Pauline Choir and the monastery rooms continued until around 1959. It was not until 1960 that the public regained access to the museum. Museum director was Alfred Tode (1900–1996) from 1945 to 1965 . His successor was Rolf Hagen , who held the post of director until 1986.

The "Vieweg-Haus" on Burgplatz was vacated in 1976 when Vieweg Verlag moved to Wiesbaden and then used as a warehouse. From 1983 to 1985 it was completely gutted and rebuilt from the inside taking into account museum interests. The museum , renamed again 44 years after the last name change on January 1, 1983 - this time as the Braunschweigisches Landesmuseum - moved into the building in 1985. After the move, Gerd Biegel took over the management of the museum and stayed in the position until the end of 2008. The mediaevalist Hans-Jürgen Derda then temporarily took over the management. Heike Pöppelmann has been the director of the house since autumn 2010 . 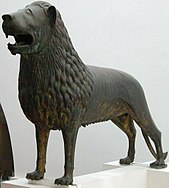 Today the BLM documents the history of the Duchy of Braunschweig and the Free State of Braunschweig from the prehistoric and early historical beginnings to the present. In addition to the large permanent exhibition in the so-called “Vieweg House”, the main building of the museum on Burgplatz, the Braunschweigisches Landesmuseum has three branches: “Hinter Aegidien” with the Jewish Museum in Braunschweig, the New Chancellery in Wolfenbüttel with a permanent exhibition on the ancient and the Early history and finally the farmhouse museum in Bortfeld .

The museum holdings are presented thematically and chronologically. The large number of objects from history, culture, economy, technology, art, folklore and social history reflect events, developments and personalities and, in this form, give a comprehensive insight into the history of Braunschweig in the context of German and European history. In 1981 the BLM received the unique calculating machine collection of the former Brunsviga works in Braunschweig for 4.5 million DM . It was set up as a factory museum by the then director Franz Trinks from 1910 and comprises around 400, some of them unique, machines and a special library.

In the years since it opened, the “Vieweg House” has developed into a cultural center for the city of Braunschweig with its comprehensive presentation of history from the 8th century to the present day. With its diverse and extensive holdings in four buildings, the Braunschweigisches Landesmuseum is one of the largest historical museums in Germany.

Oldest Jewish museum in the world 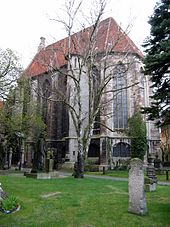 BLM Behind Aegidien with the Jewish Museum

Baroque Torah shrine (right) and Bima (octagon) of the Hornburg synagogue , the interior of which is exhibited there.

In the street Hinter Aegidien is the choir of the Paulinerkloster from the mid-12th century, which stood at Ruhfäutchenplatz on the property of the former district government and was demolished in 1912. The choir was moved to the Aegidienkloster site in 1913. It houses one of the three branches of the BLM and is the oldest Jewish museum in the world.

The center of the exhibition is the complete interior of the Hornburg synagogue , which was demolished in 1924. The museum also has a large and important collection of Jewish cult implements and manuscripts, so-called Judaica . There is also information and documents on Jewish festivals and holidays , the development of Reform Judaism and finally on the Bergen-Belsen concentration camp .

The Judaica collection goes back to a collection of court Jew Alexander David (1687–1765), which was publicly accessible as early as 1746 . It was exhibited in these rooms from the time the museum was founded from 1891 to 1944, but could not be made accessible to the public again until 1987 for reasons of space after the end of the Second World War.

Architectural monuments on the Burgplatz in Braunschweig

Directors of the Braunschweigisches Landesmuseum