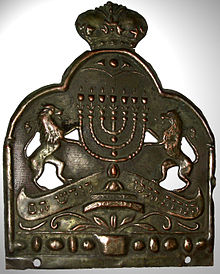 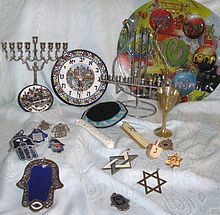 As Judaica for a handwritten or printed is literature of all languages and any authorship (including non-Jews called) that deal with the Jewish (Culture, Religion, Judaism busy) or Jewish themes. On the other hand, the collective term is used for Jewish, mostly antiquarian writings and manuscripts, rare Jewish handicrafts, as well as ritual and sacred objects (see also: Sacred implements ). Judaica collectors often pay high prices for modern or antique specimens, such as silver or gold Hanukkah candlesticks, Torah crowns , Torah pointer ( Jad ), rimonim (topper for the Torah scroll ) or a silver-plated Torah shield (Tas).

In contrast to Judaica , Hebraica is understood to mean literature written in the Hebrew language or with Hebrew letters (e.g. Aramaic or Yiddish ). An intersection between Judaica and Hebraica are works in Hebrew letters on Jewish subjects. Judaica are defined by the content (Judaism), Hebraica by the form (writing).

Judaica. Contributions to the Understanding of Judaism is the name of a theological quarterly publication of the Foundation for Church and Judaism that has been published since 1945 .