Bortfeld is a district of the municipality Wendeburg in the district of Peine in Lower Saxony .

The first written mention of the place is proven for 1308. The gentlemen von Bortfeld , who were wealthy there for a long time, named themselves after the place . On March 1, 1974, the village was incorporated into Wendeburg. The 800th anniversary celebration took place in 1983.

Two diagonally crossed red lilies in the silver field were the coat of arms of the von Bortfeld family, whose ancestral seat was on a hill west of the church. Berthold von Bortfeld was Heinrich the Lion's ministerial officer. The last of the family, Kurt, fought against the Turks in Venetian service far from home and died in 1685 on the journey home. The community expressly wished to keep the memory of the gentlemen from Bortfeld alive, and therefore adopted the lily wands as the community coat of arms, but in alternating colors in a gold-blue split shield. The Braunschweig national colors reminded of the centuries of belonging to the state of Braunschweig and at the same time to the district of Braunschweig, to which Bortfeld belonged as an independent municipality until it became part of the municipality of Wendeburg in the district of Peine in 1974. The municipal council decided on May 27, 1964, and the Braunschweig administrative president approved it on September 4 of the same year. Design: Wilhelm Krieg.

There is a primary school and the Marina Bortfeld , a harbor for privately used sport boats and sailing boats with access to the inland waterways . The new development area around the Marina Bortfeld , which has been developed since 2009, is considered an upscale residential area , which is also due to the very different, sometimes avant-garde architectural styles. The farmhouse museum, which was inaugurated in 1911, and the church of St. Georg, which belongs to the Vechelde priory and whose nave dates from 1721, with an older tower are worth seeing . 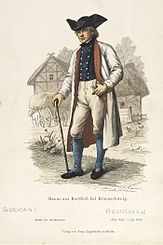 Well-known regular events are the election of the Bortfeld Mettwurst King, the flag hunt and the folk festival.

Sons and daughters of the village

Districts of the municipality of Wendeburg