Friedrich III. von Brandenburg-Bayreuth (born May 10, 1711 in Weferlingen , † February 26, 1763 in Bayreuth ) was Margrave of the Principality of Bayreuth .

Origin and years of study

Friedrich came from the connection of Margrave Georg Friedrich Karl with Dorothea , daughter of Friedrich Ludwig von Schleswig-Holstein-Sonderburg-Beck and thus from a branch line of the Franconian Hohenzollern in Weferlingen .

Margrave Friedrich enjoyed a comprehensive education and training and studied for eight years of Calvinist influenced Geneva University . At that time, Geneva was a European educational metropolis, to which royal houses, who were benevolent to the Reformed Church , sent their children. In addition to Friedrich, his older uncles Friedrich-Ernst and Friedrich Christian also stayed in Geneva. The spirit was shaped by personalities such as Jean-Alphonse Turrettini and Jean-Jacques Rousseau . The education of Friedrich was in the hands of the court master Johann Georg Erckert, later it was Friedrich Carl Freiherr Voit von Salzburg . Friedrich joined the Freemasons early on.

On November 21, 1730, he set out on an educational trip that took him to Paris via Lyon . He traveled with a few people in a carriage, accompanied by horsemen. This trip is described in great detail by a travel expense report received from Müssel. On the route prepared by his court master Friedrich was able to get to know artistic and technical achievements and gain an impression of French culture and the befitting way of life. Friedrich devoted himself to learning the French language and perfected himself to play the flute, which he had learned at home. In Paris he took flute lessons from Michel Blavet , took part in theater performances, visited numerous monuments and learned about various handicrafts.

The Danish ambassador introduced him to Paris society as a nephew of the Danish queen. In Versailles , the parklands and the water features aroused his interest. They later served as models for the expansion of the Bayreuth Hermitage . His journey led through other cities, in which military installations were also visited, in the Austrian Netherlands and the Northern Netherlands . In Amsterdam he took part in church services of various denominations and religions. On the return journey he made stops in Düsseldorf and Frankfurt am Main . A conversation with the Prussian Legation Councilor Luiscius probably took place in preparation for the engagement to Wilhelmine of Prussia . On May 18, 1731 he reached his future residence in Bayreuth, probably for the first time in his life.

On May 23, 1731 Friedrich traveled via Hof and Leipzig to Potsdam , where he arrived on May 28. The Prussian King Friedrich Wilhelm I and Queen Sophie Dorothea made preparations to marry off their eldest daughter Wilhelmine . Political considerations played an important role and there were other candidates besides Friedrich. For a long time, Prince of Wales Friedrich Ludwig von Hannover was considered the princess' fiance. But after the attempted escape and trial of the Prussian Crown Prince Friedrich , the father Friedrich Wilhelm I spoke a word of power and the so-called "English marriage" was shelved. In favor of Friedrich as a candidate for marriage, the main advantage was that this marriage enabled his country to be closer to Brandenburg-Prussia . The wedding took place on November 30, 1731, which had been preceded by several negotiations between the two states. From this marriage the daughter Elisabeth Friederike Sophie von Brandenburg-Bayreuth emerged as the only child.

After Wilhelmine's death in 1758, Friedrich Sophie married Caroline Marie von Braunschweig-Wolfenbüttel (1737–1817), daughter of Karl I and Philippine Charlotte of Prussia and niece of his first wife. This marriage remained childless.

Due to the lack of a male heir, Friedrich's uncle Friedrich Christian became his successor.

Friedrich von Brandenburg-Bayreuth succeeded his father Georg Friedrich Karl after his death on May 17, 1735. However, he was hopelessly overwhelmed by his duties as sovereign, since his father and his minister had always tried to keep him away from all government affairs - out of concern that Wilhelmine, the strong personality, could the weak and unstable Friedrich in their interests and for the benefit of Influence Prussia . He bowed to his advisors without resistance and Wilhelmine's arguments ricocheted off him. In the end, his wife managed to exert influence and a young secretary, Philipp Elrodt , was entrusted with the financial affairs. He soon rose to become First Minister, untangling the thicket of corruption and clubbing among ministers and officials, discovered deficiencies in financial management, collected old debts and opened up new sources of income. Finally Wilhelmine's apanage was increased and her husband gave her the pleasure palace Hermitage as a gift.

Monument to Margrave Friedrich in Erlangen , 1843

The very educated margrave showed his understanding of art and science, among other things, by founding the margravial state university in Bayreuth in 1742, which was relocated to Erlangen a year later, in 1743 . He founded the Bayreuth Art Academy in 1756 and had the Margravial Opera House built in Bayreuth from 1744 to 1748 as a richly furnished baroque theater. Numerous other representative buildings and facilities were built under his reign: the redesign and expansion of the Hermitage with the construction of the new Hermitage Palace with Sun Temple (1749–1753) and the new City Palace with Court Garden (1754 ff.) After the Old Palace was burned out . After the death of his first wife, the New Palace was expanded to include the so-called Italian building.

Margrave Friedrich also performed military duties. From his father-in-law he received the Pomeranian Dragoons Regiment Ansbach-Bayreuth . Later he was Field Marshal General of the Franconian District and Chief of the Franconian District Cuirassier Regiment and tried to keep his country out of the armed conflicts between Austria and Prussia, which he succeeded, even if only with great difficulty during the Seven Years' War . During his reign there were also extensive mediation attempts, mainly initiated by Wilhelmine, to end the Seven Years War.

He was an enlightened prince . At Bayreuth he was also called the “much beloved” because he was also quite popular with the common people, measured by the standards of his time. In his residence in Bayreuth he promoted science and art. As the founder of the University of Erlangen, today's Friedrich-Alexander-Universität Erlangen-Nürnberg , the name Friedrich is dedicated to the margrave . 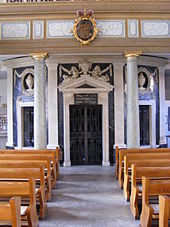 Crypt case of Friedrichs, Wilhelmines and their daughter Friederike in the castle church Bayreuth

Wilhelmine's description of her husband's personality was positive:

“He's cheerful and pleasant to talk to, although he struggles to make himself understood because he's mumbling. He is easy to grasp and has a penetrating mind. His kindness of heart gives him access to all who know him better. He is generously helpful, compassionate, polite, courteous, always in a good mood, in short, he has all virtues without any vice. The only weakness I found in him is a little carelessness. "

Wilhelmine describes the first impression in 1731 as follows:

“This prince is tall and of handsome stature; he looks posh; his features are neither regular nor beautiful, but his open, engaging and sympathetic physionomy makes up for his lack of beauty. He seemed very lively, quick-witted and by no means shy. "

At the end of September 2019, the Middle Franconian toy manufacturer Playmobil brought a figure of Friedrich III. which was presented and sold by the University of Erlangen-Nürnberg.