Hornhausen is a district of the city of Oschersleben (Bode) in the Börde district in Saxony-Anhalt (Germany).

The district in the southwest of the Magdeburger Börde is 4 km northwest of the city of Oschersleben (Bode). The terrain here drops off by over 100 m from the Hohes Holz ridge to the valley of the Great Break . To the southwest of Hornhausen there is a large nature reserve on the Großer Graben , which connects the Bode with the Oker .

The place was probably founded in the 8th century, but was first mentioned in a document in 1072.

The logo of the State Museum for Prehistory of Saxony-Anhalt in Halle (Saale) is a stylized representation of the equestrian stone from Hornhausen from the 7th century . Since 2007 it has also been run by the Börde district, which was newly merged at the time.

A copper engraving of the village view from 1646 in the collection of contemporary history from the “ Theatrum Europaeum ” (Volume 5) by Matthäus Merian shows the world's first printed pictorial representation of a bookseller with a book stand.

On September 30, 1928, the Hornhausen manor district was merged with the rural community of Hornhausen.

Hornhausen was incorporated into Oschersleben (Bode) on July 1, 2009. 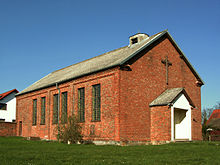 The district is connected to the city of Oschersleben (Bode) and the federal highway 245 via the federal road 246 , further road connections lead to the neighboring communities of Hamersleben , Ausleben and Wulferstedt . The Oschersleben – Schöningen railway line has been closed.

Districts of the city of Oschersleben (Bode)