City of Wanzleben is located in the Magdeburger Börde , on the Bode tributary Sarre .

The following districts of the former city were identified:

The city was first mentioned in 889. Initially, a scattered village , she was awarded in 1376 by the Magdeburg Archbishop Peter the town charter . Wanzleben grew with four districts, four city gates and a city wall, remains of which are still present. In 1438 the city built the “Blue Watch” in the west and the “White Watch” in the southwest of the city, which are still preserved. Duke Georg zu Mecklenburg besieged the castle unsuccessfully in 1550, but the city was destroyed. Since 1680 the city belonged to the Brandenburg-Prussian Duchy of Magdeburg and was in the then Holzkreis . During the Seven Years' War (1756–1763) French troops lodged and fortified in Wanzleben in December 1757, took hostages and released them after they were ransomed at the end of December. On December 29, 1757, Duke Ferdinand von Braunschweig-Wolfenbüttel opened his headquarters at Wanzleben Castle. Again the citizens had to take care of the maintenance.

From 1816 to 1994 the city was the seat of the Wanzleben district . In 1994 the district of Wanzleben merged with the district of Oschersleben to form the Bördekreis , which became part of the Börde district on July 1, 2007. Agricultural mechanization began in the mid- 19th century . The Wanzleber plow enables deep plowing in sugar beet cultivation . The seed drill replaces seeding by hand.

On July 1, 1950, the previously independent municipality Schleibnitz was incorporated.

On July 1, 2014, the new municipal constitutional law of the state of Saxony-Anhalt came into force. In its section 14 (2) the municipalities are given the opportunity to assign this designation to the districts that were towns before the incorporation. The city of Wanzleben-Börde has made use of this regulation. The relevant amendment to their main statutes came into force in 2015. In §§ 1, Paragraph 2 and 16, Paragraph 1, the districts and localities are listed with their official names.

Coat of arms of the district of Wanzleben

The coat of arms was approved on May 14, 1992 by the Magdeburg Regional Council. It has the special feature of having a red shield border.

Blazon : “In silver, a red, silver-authorized castle with a wider middle and two narrower side, pointed and spherical-crowned towers, the middle tower with two arched openings on the upper floor and an open gate, floating in it the shield of the Archbishopric of Magdeburg, which is divided in red over silver, the side ones Towers with a round arch opening each on the upper and lower floors. "

The colors of the district are red and white.

The flag was approved in 1996 and has red and white stripes with the coat of arms in the middle.

The Burg Wanzleben ( The Office ) is a large lowland castle , the natural by trenches, walls, marshy ponds and through the small river Sarre obstacles had to defend. This round castle protected and controlled the trade route from Magdeburg to Halberstadt. Wanzleben was first mentioned in a document as Burgward in 896. The over 30 m high keep is a five-storey residential tower, the lower part from the 10th, the superstructure from the 11th-12th centuries. Century. The gate or pigeon tower can be dated to the same time. From 12-14 In the 17th century, the Lords of Wanzleben worked as feudal people (Ministeriale) of the Gandersheim Monastery . The Archbishops of Magdeburg acquired this castle in the 14th century. This fortress withstood multiple storms in 1351 and 1550. When it was converted into a residential palace in 1583, a new driveway was created. In the Duchy of Magdeburg, the castle became the seat of the official governors. During the Thirty Years' War Tilly with the imperial and General Barner with the Swedish troops in changing ownership of the castle. In December 1757, Duke Ferdinand von Braunschweig-Wolfenbüttel set up his winter quarters. After the Peace of Tilsit (1807) Queen Luise von Mecklenburg-Strelitz stayed overnight in Wanzleben, and Major Ferdinand von Schill was chosen for the night of 9/10. May 1809 after the battle of Dodendorf housed by Maire Kühne. The Prussian domain Wanzleben was established at the beginning of the 18th century. After two generations of the Johann Georg and Heinrich Cuno (1725–1778) family, five generations of the Kühne family leased this domain from 1778 to 1945 - the latter with great economic success. In 1990 FW Kühne, a grandson of the last councilor, put an end to the threatened decline of the castle by purchasing this historic building. Since then the restoration of the buildings has been carried out step by step, which is clearly visible.

On Holy Saturday 1376, Wanzleben was granted city rights, including the construction and maintenance of public buildings. The completion of the town hall was completed on July 13, 1446 (Margereten day), which can be seen from a plaque on the town hall . On September 17, 1550, this town hall was destroyed in the interim war and rebuilt in 1556. This date was also recorded on a plaque at the town hall: “The word of God remains in eternity. Isaiah 40. No salvation in war. 1556. “The town hall was renovated in 1600 with a relief image attached (Mayor Matth. Seger?). A big city fire destroyed on July 8, 1684 a. a. the town hall. The reconstruction lasted until 1705, this date is also documented on a plaque. The result was a two-storey building with rectangular, partly paired windows. A double flight of stairs leads to a pointed arched portal , the entrance to the Citizens' Hall. There is the year 1687 on the wooden beam ceiling, which probably documents the gradual reconstruction. The Ratskeller was located in the basement and served as a bar for the thirsty citizens until 1849. The marketplace has a trumpet-like shape.

In 1917 the magistrate expressed its desire for peace, which is documented on another plaque on the town hall. After the neighboring town hall was torn down, an extension to the town hall was built in 1984. The town hall was restored in 1993–1995. In 1999 a multi-armed candelabra was set up on the market square. 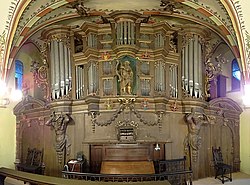 A church dedicated to St. Jacob already existed in 1263 in the Sprengel (archdeaconate) Wanzleben. After the city was founded, a late Romanesque basilica was built, which was destroyed in 1550. The reconstruction, financed with a loan of 1,100 guilders, was carried out using the remaining surrounding walls and preserving the Romanesque baptismal font.

On a pillar in the chancel, the year 1551 probably indicates that the roofing was completed. In 1589 the magistrate donated a baptismal bowl for the Romanesque font. In 1712 the Gothic extension to the three-aisled hall church (between the chancel and the Romanesque tower) was completed. Matthias Hartmann installed an organ with 2120 pipes. The richly carved organ front was created by the Prussian court sculptor Johann Georg Glume, who was born in Wanzleben. Up to 1997 the organ was restored five times, with Ernst Röver building a new one in 1902 . The existing bell dates from 1782, others were melted down during the wars.

In the 19th century, especially from 1893 to 1895, extensive, radical renovations took place in the interior. A painting based on Art Nouveau was made, which darkened considerably. The ornamental paintings were created by the local painters Troch and Schoof, the figurative paintings by Melchior Lechter from Berlin . The vestments were designed by Martin Eugen Beck from Herrnhut . Wood sculptor Gustav Kuntzsch , Wernigerode , carved the cheeks .

The renovation carried out from 1983 to 1994 gave the church a new look. In 1997 seven altar windows were restored.

The Wanzleben train station near the city on the Blumenberg – Eilsleben railway line is only passed by bioethanol trains that go to the Nordzucker plant in Klein Wanzleben. After regional trains stopped stopping at Blumenberg station in 2018 , Langenweddingen is the next train stop on the Magdeburg – Thale railway line that is still served by passenger traffic.

Two PlusBuses of the state network Saxony-Anhalt run via Wanzleben, which are operated by the BördeBus Verkehrsgesellschaft .

In Wanzleben there are a few handicraft businesses, shops and a large part of the energy is generated from biomass in various biogas plants. One of them was operated by the (now insolvent) own municipal utilities, which also operated a district heating network. The insolvent Stadtwerke Wanzleben (Bördekreis) were saved in 2015. The company was taken over by an investor and continued to operate without restrictions. After months of negotiations, the Stadtwerke were sold to the Potsdam energy supplier Danpower GmbH.

Districts of the city of Wanzleben-Börde