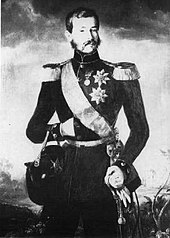 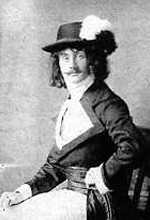 Prince Adolf I. Georg received his education from teachers at the Bückeburg high school . Visits to universities in Geneva , Leipzig and Bonn as well as a grand tour to Italy followed. In 1835 he was a captain in the princely-Schaumburg contingent of the federal army , but in 1842 he finally entered Prussian service and was aggregated as prime lieutenant in the 8th Hussar Regiment . In 1842 he has the character as captain and in 1844 to as Major à la suite received. In 1848 he took over the supreme command of the princely Schaumburg contingent and took part in the campaign against Denmark in 1849 . He fought in the battles at the Düppeler Schanzen, near Kolding , Veile, Sonderburg and the enclosure of Friderica . In 1854 he received the character of lieutenant colonel , in 1855 he was promoted to colonel and in 1858 received the character of major general . With the death of his father in 1860 he became the ruling prince in Schaumburg-Lippe. His promotion to lieutenant general took place in 1860, which was followed in 1866 by being awarded the status of general of the cavalry . Also in 1866 he voted in favor of the mobilization against Prussia requested by Austria , sent his contingent to Mainz as ordered , but in 1866 joined the North German Confederation with his principality . In 1869 he became chief of the Westphalian Jäger Battalion No. 7 . He took part in the large headquarters and on the staff of the VII Army Corps in the Franco-Prussian War , in particular the enclosure of Metz , the siege of Paris and the battle of Mont Valérien . For the latter he was awarded the Iron Cross 2nd class in 1870 . He took part in the imperial proclamation in Versailles on January 18, 1871. In 1872 he became a Knight of the High Order of the Black Eagle . In 1879 he received his patent as General of the Cavalry and in 1892 he celebrated 50 years of service in the Prussian Army .

Coat of arms of Schaumburg-Lippe on a club thaler from 1865 with Prince Adolf I. Georg