from Wikipedia, the free encyclopedia
Siege of Metz
Part of: Franco-German War

The siege of Metz during the Franco-Prussian War lasted from August 20 to October 27, 1870 and ended in a crushing defeat for the French. 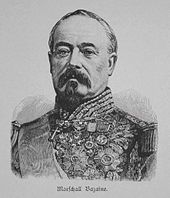 After the defeat in the Battle of Gravelotte , Marshal Bazaine withdrew the French Army on the Rhine on August 18th behind the fortress belt of Metz . The fortress commander General Coffinieres declared that he could only hold the fortress for 14 days without reinforcements, especially the eastern front between the villages of Malroy - Rupigny - Noisseville - Montoy and Colombey was heavily fortified. The French II. Corps was housed in the suburb of St. Quentin, parts of the V Corps were on the southern front at Longeville, the III. west of Plappeville, the IV. established on the heights at Le Coupillon. The VI. Corps moved into the northern Moselle forts, the guard was concentrated on the west bank east of Plappeville . Bazaine took his seat under the protection of the Guard at Ban St. Martin .

Although Marshal Bazaine did not send a request for help to Paris, the second large part of the French army, under the command of Marshal Patrice de Mac-Mahon, was ordered from the Châlons area to reinforce it. On August 22nd, Mac-Mahon began his march through Reims on the road to Rethel north-east to the Belgian border. Bazaine ordered a sortie at the end of August; on the night of August 30, two corps had to cross the bridges below the fortress and take the dominant height of Ste.-Barbe the next morning. For inexplicable reasons, however, Marshal Bazaine delayed the attempt to break out, so that the Prussians, who saw through the French intentions, managed to bring in sufficient reinforcements. 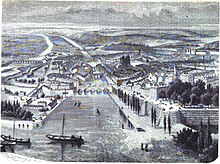 The fortress of Metz crossed by the Moselle

The French Rhine Army was formed from August 20 by the Prussian 2nd Army under the leadership of Prince Friedrich Karl (northern section and left bank of the Moselle) and the 1st Army , initially under Karl Friedrich von Steinmetz , later under Edwin von Manteuffel (southern section and right bank) Moselle bank) included. The IV. Army Corps , the Guard and XII. Corps left the unit of the 2nd Army after the enclosure on August 19 . Army corps as well as the 5th and 6th cavalry divisions as " Maasarmee " under the leadership of Crown Prince Albert from Saxony . These troops strengthened the German 3rd Army advancing south by covering the Maas line between Montmédy and Verdun .

The 1st Army on the southern and eastern sections of the fortress front initially comprised the VII and VIII Army Corps and shortly after the beginning of the enclosure the Prussian I Army Corps , which on August 25 also included the 3rd Reserve Division ( General von Kummer with 18 battalions, 6 batteries) and the 3rd Cavalry Division were assigned nearly 120,000 soldiers. The 2nd Army consisted of the III., IX. and X. Army Corps and 3 cavalry divisions, and without the II Corps, which was only briefly deployed on the western section of the fortress, may have been about 134,000 men strong. Prince Friedrich Karl of Prussia, who set up his headquarters in Corny, took over the supreme command of the German siege troops: The Prussian I Army Corps and the VII Corps stood to the right of the Moselle, the Prussian II Army Corps in the Moselle valley south of Metz, the VIII ., IX., III. and the Xth Army Corps on the left bank, the 3rd Reserve Division under General von Kummer in the valley north of Metz.

Marshal Bazaine planned to break through the enemy enclosure on the right bank of the Moselle with his entire army, to cross the Moselle at Thionville and to unite with the relief army under Marshal Mac-Mahon. The French tried unsuccessfully to break through the siege ring on August 31 by attacking Noisseville . The VI. Corps under Canrobert held the northern section against Malroy and Rupigny along the Moselle. The 4th Corps under Ladmirault and the 3rd Corps under Leboeuf held the reinforced front on the east bank of the Moselle. The 2nd Corps under Frossard and the Guard Corps under Bourbaki held the positions on the west bank of the Moselle and acted as reserves. The French attack on Failly and Rupigny was completely repulsed, the intervention of the 18th Division under General von Wrangel threw the French back over the brook of Chieulles. The following day the Prussians reoccupied the lost Noisseville, and the entire French army returned to the fortress under the protection of the Metz cannons.

Mac-Mahon's army was meanwhile defeated by the German 3rd Army and the Maas Army in the battle of Sedan on September 1st and 2nd and forced to surrender.

On September 27, the day Strasbourg fortress fell, Bazaine attempted another sortie. The troops of Frederick Charles threw the French back at Mercy le Haut to Ars le Quenes with great losses, the villages of La Grange and Colombey were cremated.

On the night of October 1st to 2nd, Bazaine let the troops advance under Canrobert's corps, under cover of 400 wagons, from Woippy northward into the fields between the lines. The French attack on Failly and Rupigny was not only repulsed, but the Germans even threw it back across the Chieulles stream. Another failure was directed against Ladonchamps, Ste.-Agathe, St.-Remy and Bellevue. The Germans (parts of the III. Army Corps ) had to withdraw from the outermost line, the places Ladonchamps and Ste.-Agathe, but were able to maintain the fortified second line. In the course of the struggle, the Prussians succeeded in driving the French back to their original positions. The goal of having two farms with large supplies of hay and food was not achieved.

The last attack by the Rhine Army began on October 7, 1870 near the villages of Bellevue, St.-Remy, Grandes Tapes and Petites Tapes. The aim of the Battle of Bellevue was no longer to break out with the union with other associations, but to procure food. The main French thrust, supported by the Imperial Guard, was directed at Woippy. During this attack, the Kummer division in the attack field had to be supported by the 9th Infantry Brigade and other parts of the X. Corps (General von Voigts-Rhetz ). The fierce battle cost the Germans 1,700 and the French 1,250 dead and wounded.

Due to the lack of necessary reinforcements and supplies and after the outbreak of a dysentery epidemic that overcrowded the hospitals with 20,000 sick people, Bazaine was no longer able to hold out. On October 25, at his instructions, the aged French General Changarnier went to the German headquarters in Corny to find out the conditions for the arms extension. Bazaine finally surrendered on October 27th with 150,000 armed men. After taxes and losses, the German siege army still had 4,050 officers, 167,338 men and 642 artillery pieces on the day of the surrender.

Théodore Devilly (Metz 1818-Nancy 1886): Les Adieux des soldats à leurs officiers, dit Les Adieux, 1885, On October 29, 1870, as a result of the conquest of Metz, French soldiers, including three marshals and 50 generals, had to undergo surrender according to the had been signed the day before in Montigny near Metz, would be extradited to the Prussians. The depicted scene, located on the embankment of the Paris-Metz line, shows the soldiers saying goodbye to their officers who have remained free.

The number of soldiers taken captive after the siege was around 142,000, a number that was only exceeded in the cauldron battles of World War II. During the siege, the French lost 2,140 officers and 42,350 men dead and wounded. The Germans captured 53 regimental eagles , 102 mitrailleuses, 541 field guns, 800 fortress guns and 300,000 rifles. 60,000 of the prisoners were transported to southern Germany by train. The route mostly led via Ludwigshafen and Mannheim, where some of the prisoners were used to build the Mühlauhafen .

The surrender marked a turning point in the Franco-Prussian War. There were popular uprisings in Paris and numerous French cities.

The released Prussian armies could now be used against the French troops in the Loire Valley and as reinforcement for the siege of Paris .