from Wikipedia, the free encyclopedia
Battle of Wörth
Part of: Franco-German War 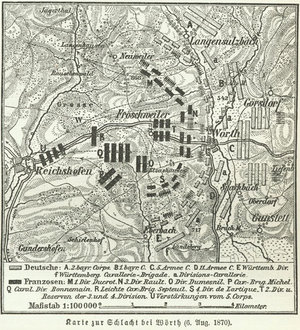 The Battle of Wörth ( French as Bataille de Frœschwiller-Wœrth and also called Bataille de Reichshoffen ) took place on August 6, 1870 in the Franco-Prussian War near the town of Wörth in Lower Alsace .

After the victorious battle of Weissenburg on August 4th, Crown Prince Friedrich Wilhelm of Prussia , the commander of the German 3rd Army , had continued the advance in a south-westerly direction and moved his headquarters to Sulz . For the next day he only ordered the unlocking and a change of front of his army.

On August 5, Napoleon III decided. to reorganize the French army into two armies according to their spatial separation. Marshal Bazaine was entrusted with command of the Rhine Army (II., III. And IV. Corps) standing on the border of the Saarland , while the Emperor reserved the supreme command of the guard and the army reserve. The VI. Corps ( Canrobert ) was still standing as a reserve in the Chalons area and was ordered to the Metz area. The V Corps (General de Failly ), which was concentrated in the southeastern area of ​​the fortress Bitsch , was supposed to seek connection with the newly formed Alsace Army. 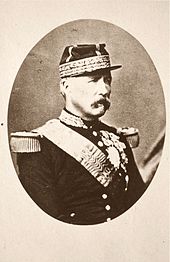 The commander of the French army in Alsace, Marshal Mac-Mahon , with his I Army Corps , a division of the VII Army Corps and a cavalry division , occupied a strong position on August 5th on the western, elevated edge of the valley of the Sauer brook , which stretched from Fröschweiler to Görsdorf along the edge of the valley. His headquarters were close behind the front in Reichshoffen . The details were: from the VII Corps - the 1st Division (General Conseil-Dumesnil ) near Eberbach on the southern wing, from the I. Corps - the 4th Division (General Lartigue ) at Albrechtshäuserhof, between the two there was the Cuirassier Brigade of the General Michel. The 2nd Division (General Pellé ) of the 1st Corps held the plateau south of Elsasshausen, the 3rd Division (General Raoult ) and the 1st Division (General Ducrot ) were in the northern position behind Nehwiller. The Bonnemains cavalry division and the cavalry brigade under Colonel Septeuil behind the village of Fröschweiler were available as reserves . The Sauer covered the entire front.

Beginning of the fighting

By dawn on August 6, skirmishes developed between the two outposts . At 7 a.m., Wörth was stormed by the German 20th Infantry Brigade (Major General Walther von Montbarry) of the 10th Division. Around 8 o'clock, General Hugo Ewald von Kirchbach , the commanding general of the Prussian V Corps, ordered the battle to be suspended. (Crown Prince Friedrich Wilhelm had ordered the defensive.) Kirchbach took it up again in the following hour, because meanwhile the II Corps of the Bavarian Army on the far right wing near Langensulzbach was roaring with heavy cannon thunder. The entire 10th division under Lieutenant General von Schmidt was already in action. Kirchbach now had the 9th Division under Lieutenant General von Sandrart intervene in the battle at Wörth: the 17th Brigade was assigned the direction of attack on Wörth, the 18th Brigade that on Spachbach (2 kilometers south).

The XI. Corps began to bypass the French position in the south at 11 o'clock, which forced the 1st French Division to change the front. For a long time all efforts of the Prussians were in vain. At 1:00 p.m., Crown Prince Friedrich personally took charge of the battlefield. At about 1.30 p.m. the Prussian V Corps stormed the western edge of the Sauer valley between Wörth and Fröschweiler , while the Prussian XI. Army corps developed to attack the Niederwald. Around 2.30 p.m. the right French wing (Pelle division) was thrown back to Elsasshausen. General von Bose had the entire artillery drawn up on the left bank of the Sauer to support the attack of the V Army Corps on Fröschweiler .

Attack of the French cuirassiers 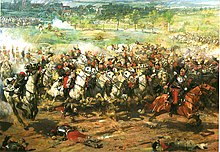 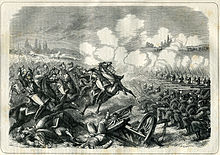 Destruction of a French cuirassier regiment in the battle of Wörth. Drawn by H. Merte for the magazine Alte und Neue Welt in 1871

To counter the threatening encirclement of his right wing in the southern sector, Mac-Mahon ordered a counterattack at around 1 p.m. He had chosen the cavalry division under General Duhesme for this purpose . This division comprised a heavy cuirassier brigade under General Michel with two regiments. Before the war, Michel was in command of the Imperial Cavalry School. His brigade was supported by a regiment of lancers and was ordered at around 1 p.m. to move the XI. Throw back Corps under General von Bose . Michel complained about the poor subsoil and disturbing trees in the area that would take the momentum from his attack. Nevertheless he threw himself with a total of 1200 horsemen from Eberbach on the advancing infantry of the 22nd Division. The Saxons responded with so-called rapid fire , in which each soldier led the fire fight independently after the first grouped volley. This new tactic of defense against cavalry was practiced in this way only by the Prussians and allies and meant a departure from the square .

During their attack, the French horsemen came into flank fire from Prussian infantry, which had established themselves in the Niederwald between Elsaßhausen and Eberbach . The attack was completely wiped out at Morsbronn . No horseman made it to the infantry lines. The French casualties in this attack were 800 out of 1200 soldiers and nearly all horses. In the case of the cuirassiers, despite the enormous losses, the new helmets and breastplates introduced shortly before the war had proven their worth, while the light Uhlans had no chance without this protection. Although the unwounded cuirassiers had to retreat on foot within the reach of the Prussians, some Prussian officers stopped fire against the now defenseless enemy. The attack had the advance of the XI. Corps can only stop briefly. At around 2:30 p.m., the Niederwald was completely in the possession of the Prussians, who soon afterwards swiveled to the right from Morsbronn and Eberbach, stormed the stubbornly defended Elsasshausen and continued towards Fröschweiler .

Attack by the Württemberg near Wörth

The commander of the Württemberg field division, General von Obernitz , had received orders to advance from Gunstett 10 kilometers to the west on Reichshoffen in order to cut off the retreat of the French. The vanguard assigned to do this, the 2nd Württemberg Field Brigade under Major General von Starkloff , deviated from this order and intervened in the fighting to support the 21st Division. During the attack on Elsasshausen, the commander of the 88th Infantry Regiment , Colonel Köhn von Jaski, fell. General von Bose received a shot in the foot, his Chief of Staff von Kamienski lost a horse, the third general staff officer of the XI. Corps, Premier Lieutenant von Heineccius, was fatally wounded.

At around 3:15 p.m., the German troops penetrated the tenaciously defended Fröschweiler from all sides. The 22nd Division penetrated the town from the west, the 21st Division in association with the Württemberg Brigade Starkloff from the south, the V Army Corps from the east and the Bavarian 3rd Division (Lieutenant General von Walther) from the north. There were tough disputes until the tips of the Prussians advancing from the south met the Bavarians coming from the north in the center and the French were threatened with encirclement. Finally, the French I. Corps had to withdraw to the west in complete dissolution under the fire of the Prussians, Saxons and Bavaria . Uhlans of the XI. Corps reached the forest between Elsasshausen and Reichshoffen in the rear of the French and the first swarms of infantry came within range of the road to Reichshoffen and took them under rifle and artillery fire. On the run, French infantry were ridden down by their own cavalry. Algerian tirailleurs held their position even further and thus prevented the complete annihilation of the French. The fleeing soldiers were immediately followed by both wings of the German army. Only from Niederbronn did the 3rd Infantry Division (under Joseph Guyot de Lespart ) of the French 5th Corps, which had advanced from Bitsch , cover the further retreat.

Main cemetery in Frankenthal (Pfalz) . Contemporary grave cross of a Prussian soldier who died in the local hospital after the battle of Wörth

The Germans lost 10,642 men in the battle of Wörth. The French lost 8,000 dead and wounded, 9,000 unwounded prisoners and 6,000 dispersed. In addition, the German troops captured 28 guns and 5 mitrailleuses , which corresponds to the complete equipment of an entire division. Mac-Mahon reported to Paris over the next few days that his units had lost all of their tents, field kitchens, food, food and ammunition.

Remember this battle a. the Wörthstraße in Lünen , Cologne , Osnabrück and Würzburg (location of the 9th Infantry Regiment participating in the battle). In Wörth, the Musée de la Bataille du 6 Août 1870 is dedicated to the battle .