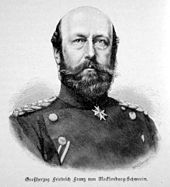 The battle of Loigny and Poupry ( called Bataille de Loigny in French ) on December 2, 1870 was a battle of the Franco-Prussian War . The meeting between three corps of the French Loire Army and a German army division under Friedrich Franz II. Von Mecklenburg in the area north of Orléans ended with a German victory.

In the late autumn / winter of 1870 the newly established French Loire Army advanced with two corps (XV. And XVI.) In the direction of Paris in order to lift the siege of the capital by the German 3rd Army . During this advance, after the successful battle of Coulmiers on November 9, 1870, she managed to recapture the city of Orléans. Another advance was not made for the time being, as the Commander-in-Chief Louis d'Aurelle de Paladines wanted to organize and train his troops better. The advance towards Paris did not begin until the end of November, and only under massive pressure from the National Defense Council under Léon Gambetta .

On November 20, the German 2nd Army under Prince Friedrich Karl, released after the siege of Metz, had approached the Pithiviers ( III. Army Corps ), Montargis ( X. Army Corps ) line, the IX. Army Corps remained at Angerville as a reserve for the time being. After the mass of the French Loire Army on the Orleans-Paris road was established, the Prince ordered the concentration of III. and IX. Army corps at about the level of Toury . The newly formed army department under the Prussian general of the infantry Friedrich Franz received the order from the prince via Beaugency to proceed directly against the left wing of the French.

The new advance of the French took place at a width of 80 kilometers, the individual divisions marched side by side. The attacked German X. Army Corps was able to repel the enemy on November 28, 1870 in the Battle of Beaune-la-Rolande . The right wing of the Loire Army then had to retreat to the forest of Orléans. To counter the danger on the right wing, the center, consisting of the XV. and XVI. Corps made a right turn towards Pithiviers . This resulted in a battle at Villepion on December 1st , in which the beleaguered 1st Bavarian Division had to withdraw. Since it was now known where the French were, the army group Friedrich Franz received the order on December 2nd to counterattack. The German front consisted of the 4th Cavalry Division (Prince Albrecht of Prussia ) and the 1st Bavarian Corps under General von der Tann and the Prussian 17th Infantry Division in the center, as well as the 22nd Infantry Division and 2nd Cavalry Division ( Graf zu Stolberg ) on the left wing.

Hugo von Kottwitz with the Lübeck battalion of the 76ers

The 2nd and 3rd Divisions of Chanzy Corps had advanced that morning from Terminiers against the Loigny and Lumeau lines , the 1st Division followed as reserve and General Michel's cavalry division secured the left flank. The battle of Loigny began at 9 a.m. with the attack of the XVI. French corps on Bavaria at Goury Castle (between Loigny and Champdoux). The castle was occupied by parts of the 2nd Bavarian Division (Lieutenant General von Maillinger ) just before the French arrived. At about the same time, the 1st Bavarian Division (Lieutenant General Karl von Dietl ), the 4th Cavalry Division ( Prince Albrecht of Prussia ) and the Bavarian Cuirassier Brigade ( Major General von Tausch) occupied Tanon-Baigneaux, from where the attack in the direction of Terminiers was to take place. The Bayern were exhausted by the fighting of recent days and could not stop the advance of the numerically superior enemy and had to go back. At Beauvillers the Bavarian 2nd Division was only able to stop the advance of the French with difficulty. In order to prevent the threatened defeat here, Friedrich Franz ordered the 17th Division (General von Tresckow ), which stood to the left of the Bavarians at Lumeau, to swing to the right and attack the French on the right flank. From 11:30 am, an additional counterattack by Bayern between Beauvillers and Chateau de Goury pushed the French division under Admiral Jaureguiberry back to Loigny. Due to the simultaneous attack, the French were surrounded on several sides. By exposing his right wing, General Chanzy had to let several battalions form a hook position at Terre noire. After several attempts, the 33rd Brigade under Major General Hugo von Kottwitz succeeded in taking Loigny and in the next few hours against all further attacks by the arriving XVII. To hold corps.

The 22nd Division (Lieutenant General Ludwig von Wittich ) was a little back in the morning at the town of Baigneaux and was supposed to advance towards Lumeau for support . This resulted in the expansion of the battle front in the southeast and contact with the 2nd and 3rd divisions of the French XV. Corps that advanced from Artenay. The 22nd Division was forced to turn to the left against this opponent and establish itself at Poupry. At first the French left wing column, the 3rd Division under General Peyvatin, only encountered the German 3rd Cavalry Brigade near Dambron. As soon as General Wittich found out about it, he advanced with the bulk of his division to support Poupry via Anneux. Tete of the 43rd Brigade, who ran through Anneux, succeeded in throwing out the enemy who had already penetrated the place. Six batteries of the 43rd Brigade drove up south ajar to Morale and delivered the columns of the French 2nd Division under General Martineau between Poupry and Autroches a prolonged firefight. Here it was possible to repel several French attacks with great losses. Around 4 p.m. the French, for their part, proceeded along the entire line with swarms of tirailleurs , who were rejected by Poupry and Morale. The commander of the 43rd Brigade, Colonel von Kontzki , fell over Poupry during the advance. The 22nd Division remained ready to fight in the defensive position until 10 p.m. and only returned to better positions around Anneux after the victory in the center at Loigny.

By about 4:30 p.m. the Bavarian 2nd Brigade under Major General von Orff had succeeded in pushing the French back about two kilometers behind Loigny, while the 4th Cavalry Division secured on the left flank. However, an enclosure failed due to the resistance of the French. In the center south of Lumeau, the advance guard of the French XVII. Corps on the battle front, but could no longer change the lost battle in their favor. By nightfall the German units had also withdrawn, the battlefield remained occupied by the respective outpost lines. At Poupry the French XV. Corps declined to the Artenay and Dambron line.

The advance of the French troops on Paris was no longer possible after this defeat. On December 3, the German 2nd Army under Friedrich Karl started a general attack in the Orléans area. The army group Friedrich Franz also continued their attack and captured Orléans on December 5th. Although Gambetta was largely to blame for this defeat through his unauthorized intervention in military operations, General d'Aurelle de Paladines was solely responsible for the accident and was relieved of his command on December 6th.

A relief on the Prince Albrecht von Prussia Monument (Berlin) by the sculptors Eugen Boermel and Conrad Freyberg shows a scene from this battle. It shows, among other things, Prince Albrecht of Prussia , who took part in the war against France as a cavalry general .