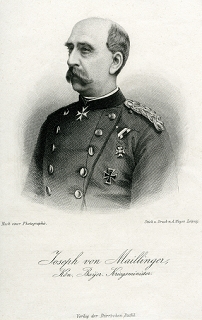 Maillinger became a captain in the general quartermaster's staff in 1859 , joined the Munich general command and had been an advisor in the war ministry from 1863 as well as first adjutant to the war minister Eduard von Lutz , whose deputy he became in 1866.

In 1869 he was promoted to major general and troop commander in the Palatinate . In the Franco-Prussian War of 1870/71 he led the 8th Infantry Brigade with distinction at Weissenburg , Wörth , Sedan , before the siege of Paris , at Clamart , Chatillon, Bagneur and L'Haye . In 1870 he was awarded the Military Max Joseph Order , which was associated with the award of personal nobility as the "Knight of Maillinger". He also received the Iron Cross 1st Class.

As lieutenant general and commander of the 2nd Army Division (from November 1870) he remained with the occupying army in France until April 30, 1873 . On January 19, 1873 Maillinger was awarded the Pour le Mérite . and shortly thereafter appointed commanding general of the II Army Corps in Würzburg . In April 1875 he was appointed Minister of War and Council of State . In 1877 he was promoted to general of the infantry and in 1880 appointed owner of the 9th Infantry Regiment "Wrede".

At the suggestion of General Friedrich von Bothmer , he proposed the establishment of the Bavarian Army Museum to King Ludwig II , which took place in 1879. After he was released on April 30, 1885 from head of the War Ministry, he was appointed Reichsrat in 1888 .