This article deals with the title of landgrave; for further meanings of this term, see Landgraf (disambiguation) .

Heraldic crown of a landgrave

Friedrich III., The Strict , Landgrave of Thuringia and Margrave of Meißen, 19th century history painting on the Albrechtsburg in Meißen 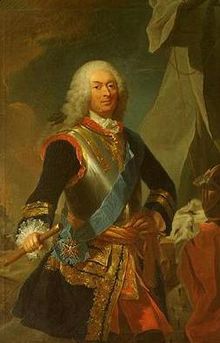 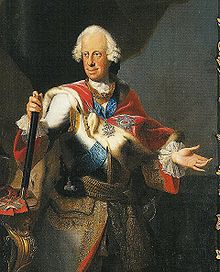 The landgrave (Latin: comes provincialis, comes patriae, comes terrae, comes magnus, comes provinciae, comes principalis, lantgravius ) is a prince title and thus stands above the simple count . In the Holy Roman Empire by the late Middle Ages at the latest, the counts, margraves and some palatine counts belonged to the imperial princes and were thus in fact equal to the dukes . The salutation of the princely landgraves of Hessen-Kassel was (Royal) Highness from 1815 .

Development of the landgrave

Initially, the landgrave was a high royal or imperial office bearer who had high jurisdiction directly from the German king as a fief in an area of ​​rulership, originally located within the imperial borders. The landgrave exercised the successor of the former count as judge over all free and noble people in areas where the old count's rights were severely fragmented. There was no mediation by a duke , bishop or count palatine . Landgraves were primarily political creations in order to weaken the power of the hitherto all-powerful tribal dukes and to prevent the attempts of counts to extend the high level of jurisdiction in their county to persons who were previously only subject to royal jurisdiction without imperial legitimation. They thus served to preserve old royal rights. The holders of the landgrave dignity mostly had other count's rights, which in terms of personal significance were above the rights as landgraves, which is why the landgrave dignity was usually listed only after the other dignities. Thuringia and Hesse are an exception. In these countries the dignity of landgrave was awarded to the Ludowingers, who also had important count and manorial rights as well as other regalia. This enabled them to use the judicial rights of a landgrave over other free people and nobles to strengthen their territorial rights outside their actual possessions, until they finally exercised quasi ducal rights in the area of ​​their landgraviate and were appointed imperial princes. The landgrave title served to summarize and exaggerate all other individual count rights. All the other landgraves were far less important and did not have the imperial princehood because of the landgraviate, but at most because of their other counts' rights.

Most important in the High Middle Ages were the Landgraves of Thuringia , whose title of landgrave "immigrated" from Thuringia to neighboring Hesse through the descendants of Saint Elisabeth in the House of Hesse , while the title of landgrave in Thuringia itself, after the accession of the Wettin ducal house, from the title of duke was covered by Saxony. In Thuringia, the landgrave title seems to go back to the presidency of the counts in the regional peace court .

In 1292 the newly founded Landgraviate of Hessen was confirmed as an imperial principality by the emperor. The Brabant lines in Hesse - the House of Hesse - carried the title of Landgrave until the 19th century, before the Landgrave of Hesse-Kassel was given the dignity of Elector by the Emperor of the Holy Roman Empire in 1803, following the decision of the Imperial Deputation Main Decision . (Although Elector was not a title, but only a position, the Landgrave, after a tough fight and generous use of donations at the Congress of Vienna , managed to be able to call himself primarily Elector and to be addressed as "Royal Highness".) Landgrave of Hesse-Darmstadt was raised to Grand Duke by Napoleon I. From then on, the princes called themselves elector, respectively grand duke and sovereign landgrave. The Landgraviate of Hesse-Homburg , which temporarily reverted to Darmstadt, was restored in 1817 as a sovereign principality in the German Confederation. When the ruling Landgrave died childless in 1866, the Landgraviate of Hesse-Homburg finally reverted to the Grand Duchy of Hesse (Darmstadt). In the same year, as a result of the Austro-Prussian War , Kurhessen was annexed by Prussia and the territory of Hesse-Homburg also fell to the Kingdom of Prussia .