The Archdiocese of Strasbourg ( Latin : Archidioecesis Argentoratensis or Argentinensis ) is an immediates Archdiocese of the Roman Catholic Church in France .

Its territory includes the region Alsace , that consists of the departments of Bas-Rhin (Lower Rhine) and Haut-Rhin (Upper Rhine). 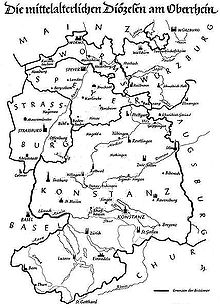 Delimitation of the diocese in the Middle Ages

Seat of the Archdiocese on Rue Brûlée

The already mentioned 343 Diocese of Strasbourg owned since the Carolingian period of the ecclesiastical province of Mainz on. After the division into eight archdeaconates , all of which belonged to the cathedral chapter, in the 12th century , the diocese had 448 parishes in 14 deaneries in the 15th century . However, due to the Reformation , the number of parishes decreased to 162 in the 17th century.

As early as the 10th century, the bishop acquired the right to mint and the dignity of count and was able to build up a territory over the centuries. The bishopric of Strasbourg was very fragmented, but had a size of 1400 km². The residence of the bishop, who had sworn the feudal oath for his French lands since 1687, was mainly in Dachstein or Zabern .

The cathedral chapter was founded in 888 as the Marian Brotherhood of the cathedral church and gained its economic independence from the bishop at the beginning of the 11th century. After the number of its members originally varied between 30 and 50, it was fixed at 24 in 1364. These had to be barons at least since the 13th century and had 16 ancestors on both their mother's and father's side.

Around 1262 the bishop tried to curtail the rights of the city of Strasbourg. Open war broke out with the citizens; on March 8, 1262, Bishop Walter von Geroldseck was decisively defeated in the battle of Hausbergen and the city gained its independence from the bishopric of Strasbourg . As a result, it developed into a free imperial city .

When the old families of Alsace went extinct in the 15th century, the noble chapter was only open to foreign candidates. The last Alsatian canon is said to have died in 1456. The sometimes massive disputes were also fought at the Council of Basel in the 15th century . In view of the scarce resources, in 1650 the chapter was divided into twelve capitular canons with bishops' suffrage and the other twelve canons with poorer endowments.

After the conquest of Strasbourg by France in 1681 and the final annexation in 1697 in the Peace of Rijswijk , massive re-Catholicization immediately began. A constitutional revision carried out shortly before 1700 made it easier to prove nobility, so that French people could now also be accepted.

In the wake of the French Revolution , there were also significant upheavals in the diocese. The last prince-bishop fled to Ettenheim ; In 1803, the part of the Hochstift on the right bank of the Rhine was also dissolved in the Reichsdeputationshauptschluss .

After the Franco-Prussian War of 1870/71 , the diocese (like the realm of Alsace-Lorraine ) fell back to Germany (now the German Empire ). The diocese was put on an equal footing with the German dioceses, but was always considered an exceptional area. Since the return to France ( Versailles Treaty 1919), the regulations of the Napoleonic Concordat have been in effect again . Together with the diocese of Metz , it forms an ecclesiastical exception area in France and, in contrast to the other dioceses of the country, receives a church tax with it . In addition, the Strasbourg and Metz bishops are de facto chosen by the French Bishops' Conference and by the Pope, but are nominally appointed by the French President. In the case of these two dioceses, the French President is the last head of state to appoint bishops. On June 1, 1988, the diocese was raised to an archbishopric on the occasion of a visit by Pope John Paul II , but without becoming the seat of a metropolitan . 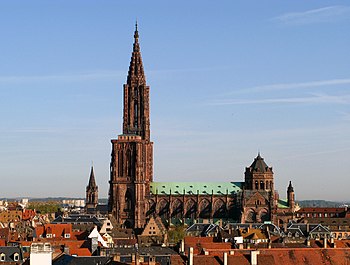