The episcopal vicar ( Latin Vicarius episcopalis ) is a "representative" of the bishop . 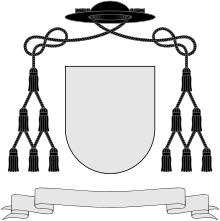 Coat of arms of a Bichofsvikar in the Roman Catholic Church

The episcopal vicar is representative for a specific area within a diocese according to can. 479 §2 CIC . This office was newly created by the Second Vatican Council . He is administratively equated with the Vicar General , but has a judicial restriction to a certain territory within a diocese or to a clearly defined area of ​​responsibility. For the office of bishop vicar is basically no episcopal ordination required, but often also have auxiliary bishops in this function operates. A distinction is to be made between the episcopal vicar and the vicar capitular , cathedral vicar or cathedral capitular .

1934 appointed Bishop of the Evangelical Lutheran Church of Hanover August Marahrens in the church struggle in response to the cancellation of the four previous Generalsuperintendenturen and the appointment of Landespröpsten by the German Christians in turn seven episcopal vicars. They were given the task of supporting the pastors' community on a part-time basis, visiting parish conventions and visiting congregations. When the power struggle between the German Christians and the regional bishop was decided in favor of the latter, the office of regional superintendent was created in place of the episcopal vicars on June 15, 1936 , who took over the spiritual supervision within a district.