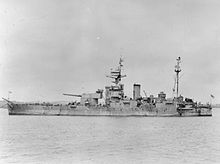 The HMS Abercrombie , completed in 1943 for the Allied landing operations in Italy

A monitor is a relatively small and slow warship , armed with very heavy guns in one or more towers , designed for use in shallow coastal waters and on rivers.

The ship type is named after the ironclad USS Monitor , the first ship of its type to be built by the United States ( Northern States ) during the American Civil War .

At the end of the civil war, 50 monitors were in service or under construction in the Union fleet of the northern states. A large monitor even managed to cross the Atlantic.

Monitors were not intended for classic sea battles or use in naval units, but were only partially seaworthy platforms for a few large-caliber guns for coastal defense or for attacking land targets. 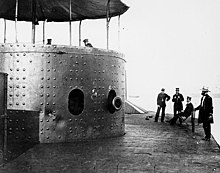 Gun turret on deck of the USS Monitor

Construction drawing of the monitor

After the success of the American ship Monitor , ships with a shallow draft and low freeboard , armed with a few large-caliber guns in one or two turrets, were also built in numerous fleets . They were used for coastal defense. Because of their design, most offshore monitors have proven to be unseaworthy. During the First World War , Great Britain again built monitors to bombard the coasts of shallow water areas, which were equipped with complete turrets from outdated cruisers or ships of the line . These ships were used off Flanders , in the Dardanelles , in the Adriatic Sea , in the eastern Mediterranean and in East Africa (see SMS Königsberg ). The fleets of Italy , Romania and Austria-Hungary also had monitors in their inventory.

During the Second World War only Great Britain and the Soviet Union used this type of ship. In Great Britain, with the two Roberts-class monitors , two very large ships with a displacement of approx. 9,000 t were built, which were first used when the Allies landed in Italy. The British monitor Erebus shelled German positions in Normandy and Brittany during the Allied landing in June 1944 . Most monitors were scrapped after the war.

The Royal Navy's chief designer, Edward James Reed , drafted the plans for the British Navy's first monitors after 1864. A total of seven ships of their type were built, which took over the coastal defense in British overseas colonies (Australia / India). The first British ship of this type was the Cerberus for the coastal defense of the Australian colony of Victoria , especially the capital Melbourne . As the first larger British warship, she was exclusively steam-powered and dispensed with masts and rigging, which enabled her to accommodate her heavy armament in two armored, pivoting twin towers, as was done similarly on later steam-powered ships of the line . However, this also limited the possibilities for use, as it only had a limited range under steam, as the machines of the time were not particularly efficient. The operational doctrine for the new buildings was only intended to be used for selective coastal defense.

The Cerberus was built by the Palmer Shipbuilding & Iron Co. on Tyne , England, where it was launched on December 2, 1868 and fully equipped in September 1870. An emergency sails was built for the overpass. On April 9, 1871, the Cerberus arrived in Melbourne, where she was to stay for her entire service. The sister ship Magdala was built by Thames Ironworks & Shipbuilding Co. until November 1870 for the Her Majesty's Indian Navy (from 1892 Royal Indian Navy ). Three masts were also temporarily erected on the Magdala to bring the ship to India under sail. Two ships were deemed necessary to defend Bombay . For cost reasons, however, only a cheaper and smaller version of the first two monitors was ordered from J. & W. Dudgeon in London. The ship, which was already completed as Abyssinia in October 1870 , was unlike the two larger half-sisters for the transfer, and it reached Bombay under its own power.

The Glatton , the largest ship in the British first series

In addition to these monitors for use in the colonies, the Glatton was also a larger monitor with reinforced main armament from a twin turret with 305 mm L / 12 cannons. The Glatton is said to have been briefly in fleet service only once; otherwise she was assigned to the artillery school.

The Franco-Prussian War resulted in orders for four monitors for a slightly improved version of the first British monitors in 1870. In addition to the three previous private construction yards, the fourth order went to the Scottish shipyard of John Elder . The armament and final equipment of the ships took place in the navy's own shipyards. Since the political situation had calmed down again, the final equipment of the monitors was carried out as an employment measure by the state shipyards when there was no urgent work to be done. While all four units ordered in 1870 were launched in 1871, the ships were not completed until 1874, 1876 and finally two units in 1877. The ships that were only rarely used were eliminated in 1903. There were hardly any modernizations; only the two Indian units were retrofitted with two 203 mm L / 30 Mk.VI twin towers .

After all monitors were withdrawn from the service of the Navy after the turn of the century, it was not until the First World War that ships were used again, which were referred to as monitors. The first were three Javary- class gunboats of the Brazilian Navy launched in 1913 for tasks on the Amazon and its tributaries, which Brazil no longer wanted to take. The British government intervened and bought the gunboats for ₤ 155,000 each to prevent them from being sold to a neutral country and perhaps from there to Germany. The ships came into the service of the Royal Navy as monitors of the

Confiscated and after a long dispute with Norway , the two coastal armored ships of the Bjørgvin class ordered from there came into service with the Royal Navy as monitors of the Royal Navy after several changes to the plan in 1918

As part of the war building programs, the Royal Navy received in 1915

The newbuildings were relatively simply constructed and used existing main guns. In the First World War the monitors Raglan , Glatton , M15 , M21 , M28 and M30 were lost; when intervening in the civil war in Russia, the M25 and M27 were surrendered on the Daugava when the allied invasion troops withdrew. After the war ended, the monitors were mostly sorted out.

At the beginning of the Second World War, only the two Erebus- class monitors were in service with the fleet, of which the Terror was lost off the Libyan coast in early 1941. During World War II, the Royal Navy still received

Roberts was the last of the great British monitors to be demolished in 1965. One of the last used guns is on display at the Imperial War Museum in Lambeth. The small M33 monitor is on display in the Portsmouth Historic Dockyard and has been open to visitors since 2015.

After the monitors had proven to be unsuitable for use on the high seas because of their poor seaworthiness, monitors were increasingly built and used as river combat ships. The tasks of these units were artillery support for the army, securing river crossings, supporting transfer operations to the other river bank and fighting enemy river combat ships. The peculiarity of these units was that although they were armored and armed with turrets and machine-gun stands, they were not allowed to have too great a draft. Depending on the depth of the inland waters, this type of ship includes units of 70 t displacement and 0.4 m draft (Polish monitors built for the Vistula ) to 1000 t displacement and 1.5 m draft (Russian units, used on the Amur ). The caliber of the main armament also varies accordingly from 75 mm to 130 mm. They were built in large numbers in the USA, Russia and Austria-Hungary and were used in both world wars, mainly on the Danube and the rivers of the Soviet Union and China. When Germany invaded Poland in 1939 put Poland's monitors and river gunboats , which in principle only smaller flow monitors were on the basin of the Pripyat and its tributaries.

Most of the river monitors were also decommissioned after World War II . The last river monitors are the units of the type LCM (6) Monitor  - conversions of the landing craft LCM used in the Vietnam War . As a continuation of this type of vessel can likewise in the Vietnam War in the Mekong Delta used patrol boats, rigid (Riverine) and the Patrol Craft Fast (Swift Boats) see who were also armored and equipped with turrets. 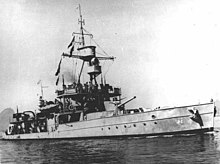 Monitors of the Polish river flotilla

The crews of the Polish river monitors joined the land forces under General Franciszek Kleeberg , which were among the longest fighting Polish units in the attack on Poland and only surrendered their weapons on October 6, 1939.

The Imperial Russian Navy had ten Bronenossez -class monitors built from 1863 , which were put into service in 1864/65. The ships were built based on the American Passaic class with only minor changes. Also in 1863 the construction of the Monitor Smertsch began in St. Petersburg , based on the model of the gunboat Rolf Krake built by Robert Napier & Sons in Glasgow for the Danish Navy . A tower construction developed by the British naval officer Cowper Phipps Coles was used for the Smertsch , which had advantages over the construction by John Ericsson used on the American monitors and the boats of the Bronenossez class .

The following monitors, among others, were put into service in the Soviet naval fleet:

In the 1970s, the Soviet Union also began building a number of river monitors; this is how the so-called Yaz class (project 1208) was created from around 1975 . These very shallow river combat ships were armed with two modified 115 mm tank cannons from decommissioned T-62 tanks and two multi-barreled 30 mm AK-630 automatic cannons.

Naval battle off Iquique on May 21, 1879 with the Peruvian Monitor Huáscar 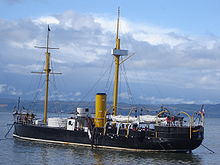 Ramming monitors were created after 1866 in various navies. At Lissa , the Austro-Hungarian fleet won the naval battle on July 20, 1866 using a ramming tactic against Italian warships . After this battle, many navies returned to this type of ship combat known from antiquity. The so-called ramming monitors therefore had a ramming bow as their main armament in addition to artillery . In addition to the Rammmonitoren also emerged Rammkreuzer and Aries ships that were designed for similar combat tactics.

On March 8, 1862, during the American Civil War, the Virginia sank the frigate USS Cumberland by ramming it below the waterline. The ramming tactic also proved to be successful in the naval battle near Iquique on May 21, 1879, in which the Peruvian monitor Huáscar sank the outdated Chilean corvette Esmeralda with his ram. Since the ramming monitors no longer proved themselves later, they were soon abolished and rebuilt or decommissioned.

A submarine monitor is a submarine with extremely powerful artillery armament for this type of ship. Developed in Great Britain in 1916, they were designed to approach and then bombard coastal targets underwater. From 1917 four M-Class submarine monitors were built, too late to be used in World War I. Due to the weight and length of the gun used and the recoil energy, there were significant stability problems. The swivel range of the gun was minimal, aiming was de facto with the whole boat. Target assignments should be given by aircraft or other warships, as the submarine monitors themselves had no aiming device. The ammunition and fuel supply was very limited because of the limited space. The gun could only be loaded in a surface position. The gun could also be fired in a half-submerged state as long as the muzzle was above water. The submarine monitors were not popular with the crews because of their problems. The technically more sophisticated development of extremely powerful artillery armament was finally implemented by the French Navy with the submarine cruiser Surcouf , which after completion in 1934 was temporarily the largest submarine in the world.