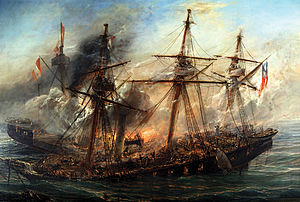 The Huáscar sinks the Esmeralda (painting by Thomas Somerscales )

The naval battles at Iquique and Punta Gruesa took place during the Saltpeter War between Chile and Peru on May 21, 1879. At Iquique the Chilean captain and today's national hero Arturo Prat was killed and his corvette Esmeralda sunk; In the battle of Punta Gruesa, which took place a few hours later, the Peruvian armored frigate Independencia sank after it hit a rock.

The aim of Chile in the early stages of the war was to destroy the Peruvian Navy and thus achieve sole naval control off the Peruvian, Bolivian and Chilean coasts. In May 1879 the Chilean corvette Esmeralda , the gunboat Covadonga and the La Mar transporter blocked the port of the then Peruvian city of Iquique . The ships were under the command of frigate captain Arturo Prat Chacón and captain Carlos Condell de la Haza. On the Peruvian side, the flagship Huáscar under the command of the Peruvian Rear Admiral and later national hero Miguel Grau Seminario and the armored frigate Independencia under the command of Sea Captain Juan Guillermo Moore Ruiz were ordered to end the blockade. 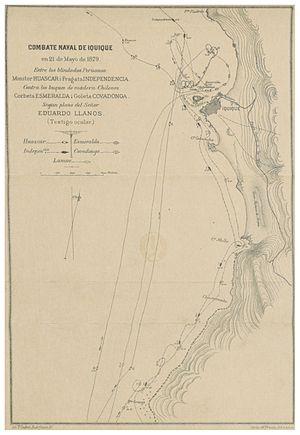 On the morning of May 21, 1879, the Peruvian ships approached the port of Iquique. While the La Mar hoisted the flag of the USA and fled, the Esmeralda and the Covadonga first went into the immediate vicinity of the port and opened fire on the approaching Huáscar . Half an hour later, the Independencia arrived before Iquique. Since the Peruvians could not aim reliably due to the rough sea in the port entrance and Admiral Miguel Grau did not want to take the risk of endangering Peruvians by accidentally bombarding the shore, it was hardly possible for him to return fire.

After mobile Peruvian coastal batteries were brought into position and opened fire on the Chilean ships from the beach, they tried to flee. The Covadonga initially managed to escape south, they were pursued by the Independencia and caught up a few hours later. The sea battle between these two ships, in the course of which the Independencia ran on a shoal not shown in the nautical charts , is predominantly regarded as an independent war event and referred to as the sea ​​battle of Punta Gruesa . To prevent capture by the Chileans, the Independencia was put aground by its own crew and the crew began to leave the ship. The Covadonga returned and took fire on the disabled ship. The loss of their largest and most modern ship hit the Peruvian Navy hard and is mainly attributed to the inexperience of the ship's command.

The Esmeralda had problems with her machine, so that she could not escape in time and avoid the fight with the Huáscar . When she had to give up her favorable starting position due to the shelling from the coast and move northwards, Admiral Grau noticed that the Esmeralda was not protected by torpedo positions , as agents had falsely informed him in advance , and he decided to ram the enemy . Since captain Arturo Prat was aware of the fact that the ironclad Huáscar was clearly superior to the Esmeralda and could hardly be injured by fire, since the projectiles ricocheted off the iron armor, he decided to board the Huáscar on her first ram attempt. This failed, however, because Grau turned off so quickly that only Prat himself and a maximum of two other men from the boarding party managed to reach the deck of the Huáscar , where they died in the hail of bullets. After the death of their commander, the officers of the Esmeralda decided to continue the practically hopeless fight and not to surrender. A second attempt at boarding brought only a few Chileans on board the Huáscar , where they fell victim to the Peruvian resistance. Within shouting distance, Admiral Grau called on his opponents to surrender , which the Chilean commander, First Lieutenant Luis Uribe, refused to do . The Huáscar rammed the Esmeralda three times with her iron ram in the course of the almost four-hour battle . Immediately before the third ramming attack, the ship was hit at close range by a volley from the Huascar . The ramming hit the already badly damaged Esmeralda amidships so badly that it sank immediately. Miguel Grau initially had 62 surviving Chilean sailors rescued from the water before he pursued the Covadonga . Although he met them in the battle with the Independencia , he could no longer prevent their escape. After a short attempt at readjustment, he returned to the wrecked Peruvian tank frigate, picked up the surviving sailors and ordered the ship to be set on fire.

A Chilean convoy with 2,500 soldiers , ammunition and other material, which was on its way to Antofagasta and whose breakthrough Grau actually had to prevent, was able to reach its destination unmolested due to the tough defense of the Esmeralda . With their other ships, the Chileans had to withdraw to Valparaíso and end the blockade of Iquique.

140 Chilean sailors, including Captain Prat, died in the unsuccessful attempts at boarding the Huáscar and the sinking of the Esmeralda ; when the Independencia sank , around 70 Peruvian seamen were killed. The other two ships involved each recorded only a few failures.

A few weeks after the fight, Admiral Grau sent the fallen Arturo Prat's sword along with a letter of condolence to his widow, praising the courage and bravery of his opponent with appreciative words and expressing his regret about the horrors of the war.

The Chilean Navy now began a relentless hunt for the Huáscar , which in turn shelled Chilean ports and supply lines. On October 8, 1879, she was finally caught and successfully boarded and captured in the naval battle of Angamos . Admiral Grau was already made earlier this battle by a grenade hit on the bridge .

The battles of Iquique and Punta Gruesa were overall a tactical victory for the Peruvians, as the blockade of Iquique could be ended as intended. However, they paid a strategically too high price for this prestige success, which had seemed necessary for domestic rather than military considerations. After the loss of the Independencia , the Huáscar was the last major warship that the Peruvian Navy had left. The "Day of Iquique" is therefore generally seen as a preliminary decision for the Chilean Navy to achieve sea supremacy in the Pacific and is celebrated every year in Chile.

Prat and Grau, whose lives show certain parallels and who fought side by side in the Spanish-South American war against the Spanish fleet 13 years before Iquique , are revered as naval heroes in their respective countries to this day and are considered symbolic figures of chivalry and patriotic sacrifice and nobility. In 2000, gray was even named “Peruvian of the Millennium”.

In May 2010, after five years of shooting, the film La Esmeralda, 1879 (screenplay and director: Elías Llanos), which was sponsored by the Chilean government and shows the sinking of the corvette Esmeralda by three rams by the Huáscar off Iquique, was released from a patriotic Chilean perspective . It is the most expensive film production ever made in Chile. The plot of the film depicts the events on the basis of the memoirs of the Chilean sailor Wenceslao Vargas (1861-1958), who came to the Esmeralda as a cabin boy during the blockade in Iquique in 1879 and is considered the last survivor of her crew. who witnessed the "Day of Iquique". The depiction almost completely ignores the ships involved in the fighting besides the Esmeralda and the Huáscar and concentrates on the prehistory and the fate of the Chilean war heroes involved in the fighting. It shows the two boarding attempts of the Chilean sailors who die in the fire of the Gatling repeating gun installed on the Huáscar . In contrast to the historical battle, the two Gatling guns set up on the Esmeralda , which in reality smeared the deck of the Huáscar , are not shown. The death of the only Peruvian man killed in the clash, Leutnant zur See Jorge Enrique Velarde, whose circumstances of death are controversial among historians (it is unclear whether he was killed by fire from the enemy ship or by targeted shots Prat during this ) is mentioned only indirectly stayed on deck of the Huáscar ). In the film, the Esmeralda is unable to maneuver after a boiler explosion , and the Chileans themselves initiate the sinking by opening the hatches, immediately before the Huáscar hits her for the third time . The survivors are rescued on the orders of Admiral Graus, who justifies his action with the sentence: "We won a battle, not the war." For the film, buoyant replicas of the two ships were made over a period of more than a year Esmeralda was actually sunk while filming. With the replica of the Huáscar , according to temporary plans, a museum was to be set up near the site of the later hijacking of the ship near Angamos , but this was not done for reasons of cost. The replica only shows the outer shell of the monitor and has no interior fittings.